The comedy “Blast from the Past” features Adam (Brendan Fraser) facing a modern LA after 35 years in his parents’ fallout shelter. In the happy ending he funds a life together with Eve (Alicia Silverstone) from the stock proceeds his prescient parents bought in the early 1960s. Funny movie but I always wondered what stocks they bought.

The first stock that occurred to me was International Business Machines Corp. (NYSE:IBM). One could buy IBM for $5 in 1962 and once the fallout door unlocked in 1997 have a twenty bagger; same with The Walt Disney Company (NYSE:DIS), which went for $2.00 in 1962 and almost touched $40 in 1997.

Which stocks to buy before a Blast from the Future?

Assume that the stocks in the movie had yield and so compounded interest. To hedge your bets you would need to diversify and pick up a promising small cap, some mid-caps and big caps with yield. Maybe you wouldn’t want too much tech as one game changer could tank an entire company. Another factor to consider is that you wouldn’t want a company too dependent on a charismatic CEO or visionary founder.

Imagining a world 35 years away one could expect media content as well as tech to be the most changed. I would want to stay away from those industries for a portfolio that will be held untouched. The energy industry as well might be unrecognizable in 35 years.

What companies would be flourishing in 2048? I like Waste Management, Inc. (NYSE:WM). It is in an industry that is never going away and is innovative with ambitious energy conversion plans using the waste and landfill gas it collects and then converting it to energy. CEO David Steiner told CNBC viewers that it creates more energy from its facilities, five times more, than all US solar companies combined. Waste Management has been converting its trucks to natural gas, working closely with Clean Energy Fuels Corp (NASDAQ:CLNE). Their compressed natural gas fleet now numbers 2,000.

This largest waste management company in North America has a forward P/E of 17.41 and a yield of 3.50%. Waste Management, Inc. (NYSE:WM) isn’t the revenue grower it used to be, however, but plans to monetize all its garbage into compressed natural gas fuel and to generate clean electrical power are already underway. For its future energy potential alone Waste Management is a buy.

An ever expanding global population merits an agriculture stock. I was torn between DuPont Fabros Technology, Inc. (NYSE:DFT) and Deere & Company (NYSE:DE). What sold me on Deere was the dividend chart below with a better rise in yield for Deere. 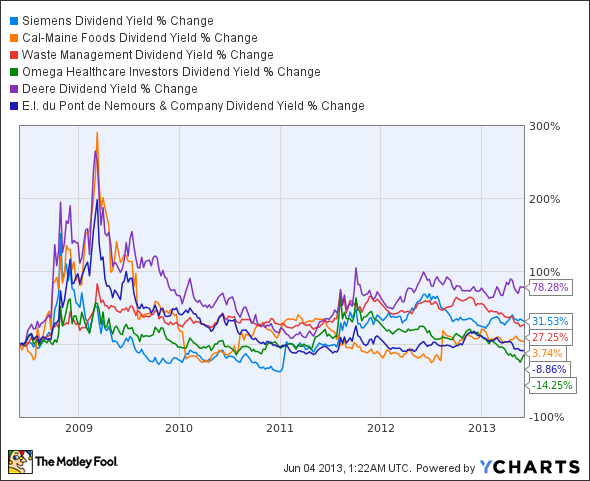 Another factor in choosing Deere is the backlash against genetically modified seed companies like Dupont rival Monsanto Company (NYSE:MON). A chemical company like DuPont has historically had more headline risk than the venerable Deere & Company (NYSE:DE). Warren Buffett also recently bought Deere for the Berkshire Hathaway portfolio. (Not a bad name either for a buy and hold for a 35 year portfolio).

Deere & Company (NYSE:DE)’s trailing P/E is low at 10.87 with a 2.30% yield. It manufactures and sells equipment through its two divisions: Agriculture and Turf and Construction and Forestry. This is a good all around play on emerging markets, agriculture, and a housing resurgence.

For triple bang for your buck a mid cap health care facility REIT with yield could really outperform as those boomers and the boomer babies enjoy ever longer lives but not necessarily in the best of health.

One with recent insider buying is Omega Healthcare Investors Inc (NYSE:OHI) with a 5.70% yield and a ten year track history of increasing the yield. Omega Healthcare primarily invests in long term health care facilities in the US, some 400 in 35 states.

I used the Motley Fool CAPS screener to find a small cap with yield, gross margin over 15%, P/E between 5 and 15, and with insider conviction. It didn’t fail me delivering Cal-Maine Foods Inc (NASDAQ:CALM), the largest US egg producer and distributor. It offers a 3.8% yield with an 11.8 trailing P/E.

The company has large insider ownership of 32.8% mostly by Chairman Fred Adams Jr. and CEO Adolphus Baker who together hold 2 million shares. This defensive name’s gross margin is 19.8% and it controls 20% of the fragmented US shell egg market. As animal proteins get ever more costly eggs will be the default protein for Americans.

Last, a diversified industrial conglomerate is in order and it was tough deciding between General Electric Company (NYSE:GE) and rival Siemens AG (ADR) (NYSE:SI). An international stock couldn’t hurt and with a lower trailing P/E of 16.33  than GE’s 17.51 it looked like Siemens would take it all but GE has a higher yield of 3.30% to Siemen’s 2.80%. It was the PEG that finally won the day with Siemens at only .24 to GE’s 1.29.