Billionaire David Einhorn is apparently making an exit from Microsoft Corporation (NASDAQ:MSFT) at just the same time that Jeffrey Ubben’s ValueACT Capital is betting  big on the tech giant. At the end of 1Q, Einhorn and his billion-dollar hedge fund, Greenlight Capital, owned just over 6 million Microsoft shares.

Einhorn notes that he and Greenlight took the boost in stock price that Microsoft Corporation (NASDAQ:MSFT) got from the ValueACT news to sell its stake in the tech giant, noting in his 2Q investor letter that…

The problem with Microsoft Corporation (NASDAQ:MSFT) from an investment standpoint? Over the last 10 years, the stock has traded in a tight range between $16 and $36, climbing only 20% for the decade… 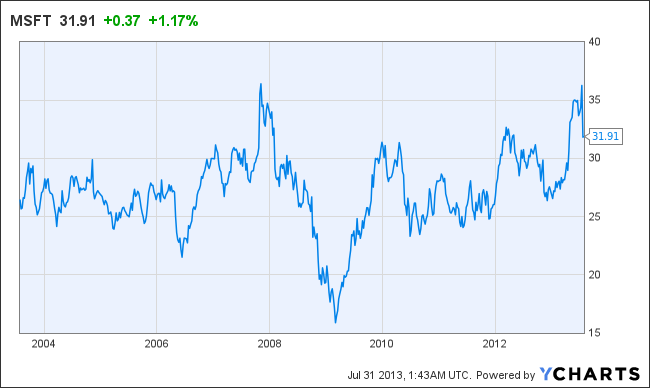 ValueACT hopes to change this. During 1Q, ValueACT bought up over 33 million Microsoft Corporation (NASDAQ:MSFT) shares. The fund is now pushing for board representation and hoping to put together a succession plan for Steve Balmer. The other thing ValueACT could be pushing for includes putting Microsoft’s $75 billion in cash to work for shareholders.

Microsoft Corporation (NASDAQ:MSFT) is at an inflection point, with the company being at a crossroads thanks to its vast exposure to the declining PC market, where about 50% of its revenue is related and where Microsoft remains the dominant player in PC operating systems.

Even still, revenue is expected to be up 5.6% in fiscal 2014 and 6.1% 2015. Microsoft also has the upcoming release of its new video-game console, Xbox One, which should give interim revenue a boost while the company figures out other areas of its business model.

For a company in transition mode, it’s still trading at all-time highs, however, the stock is trading at 1990 levels on a P/E basis… 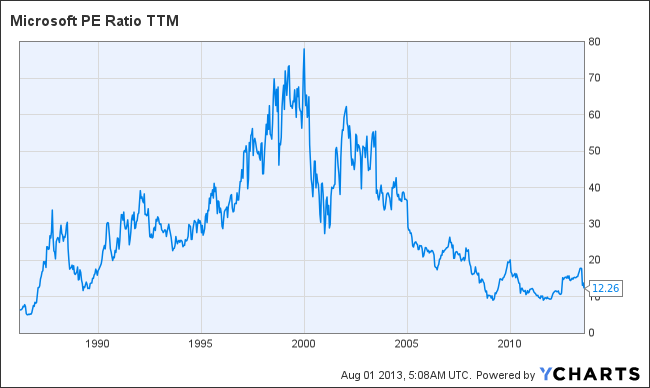 …so by historical standards it could still be considered cheap.

To help put in perspective just how far behind Microsoft is in the tablet market, let’s compare it to tablet-leader Apple Inc. (NASDAQ:AAPL). IDC reported that for the first quarter, Microsoft sold 900,000 tablets compared to Apple’s 19.5 million, over 20 times that of Microsoft.

Could International Business Machines Corp. (NYSE:IBM), aka Big Blue, be a better bet in the tech field? The company operates in the high-margin software and services part of the tech market. The tech giant also enjoys a return on equity in excess of 80% and return on invested capital in excess of 30%, well above Microsoft or Apple Inc. (NASDAQ:AAPL).

IBM has a diverse product portfolio, having been awarded 6,478 patents in 2012, more than any other company for the 20th straight year. International Business Machines Corp. (NYSE:IBM) also has operations in over 170 countries.

Last month, the company posted solid EPS results. Second-quarter EPS came in at $3.91 compared to $3.51 for the same period last year. But the numbers get better than just growing EPS. Operating margins expanded and Big Blue revised full-year guidance upwards; both moves were attributable to its greater focus on higher growth markets. IBM also pays a near 2% dividend yield and trades just under 14 times earnings.