Intel Corporation (INTC): What Does The ‘Death Of The PC’ Mean For Its Business?

A lot of people are concerned with the impact of the declining PC market on PC manufacturers, including Hewlett-Packard Company (NYSE:HPQ), Dell Inc. (NASDAQ:DELL) and Lenovo. However, only a few are concerned with the impact on PC chip manufacturers like Intel Corporation (NASDAQ:INTC). Intel is the dominant force in making PC chips, with a PC market share of nearly 80%. Intel’s Core chips are used in nearly all the laptops from some of the biggest PC manufacturers. 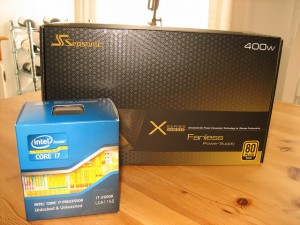 Total PC shipments in Q4 of 2012 fell about 5% to 90 million units, and analysts believe that this could be the end of the PC era. One of the biggest reasons for this is the tablet industry, which saw a 70% increase of unit shipments in the fourth quarter of 2012. However, some analysts believe that tablets should come under the category of Personal Computers, and if you include that tablets industry in the PC market, then the market is booming. Like the old desktop PCs started to fade away, the current lineup of PCs is also likely to decline, as tablets are the next PC or post-PC.

Intel Corporation (NASDAQ:INTC) doesn’t have a major chunk of market share in the growing tablets and smartphones market, but competitors NVIDIA Corporation (NASDAQ:NVDA) and QUALCOMM, Inc. (NASDAQ:QCOM) do thanks to their first mover advantage. However, Intel is trying to enter the market with heavy R&D expenditures and its latest processor line.

Intel Corporation (NASDAQ:INTC) is currently trading between $21-$22 and has a market cap of over $108 billion. Intel pays quarterly dividends, with a current yield of 4.3%. Intel has a reputation in paying and increasing dividends regularly, which is why it is considered as one of the best dividend paying tech stocks. However, analysts at Bernstein Research believe that the company’s future dividend increases won’t be as big, in magnitude, compared to the previous years. That being said, Intel will definitely continue to improve dividend payouts every period even if the magnitude of the payout increase falls in the future.

NVIDIA Corporation (NASDAQ:NVDA), on the other hand, is currently trading around $12 with a market cap of $7.8 billion. The company’s stock has been on a decline after peaking at $14.50 last year, mainly due to the decline of the PC market; a segment where NVIDIA got its popularity in graphics. The company’s position in the tablets and smartphone industry is also not the strongest, due to increased competition.

QUALCOMM, Inc. (NASDAQ:QCOM) is trading around $65-$67 with a market capital of over $114 billion. Qualcomm’s recent growth is a result of its dominant position in the smartphones market. The reason why Qualcomm got so popular in the industry is because of its “first mover advantage” in releasing mobile chips featuring 4G LTE support, which is why the company has very strong position in the industry, specially in the high-end smartphones segment.

Even though NVIDIA Corporation (NASDAQ:NVDA) and Qualcomm have seen major success recently, Intel still looks like the better stock to invest in, with a forward P/E of just over 10 and a big yield.

Why the future looks bright for Intel

First, Intel Corporation (NASDAQ:INTC) will probably dominate the market for Windows 8 PCs. Even though the true PC market is declining, it’s still early to comment on Windows 8. The platform’s success lies in the sales of hybrid PCs, which use Intel’s Atom processor and can act as laptops and tablets.

Windows 8 tablets are also likely to get popular by the end of 2013. Manufacturers like Hewlett-Packard Company (NYSE:HPQ), Dell Inc. (NASDAQ:DELL), Samsung, Asus, Lenovo and Acer have already released their Windows 8 tablets. Even though some of  these feature processors from QUALCOMM, Inc. (NASDAQ:QCOM) and NVIDIA Corporation (NASDAQ:NVDA), Intel’s strong history and partnership with Microsoft Corporation (NASDAQ:MSFT) will help the company to dominate this particular tablets market as well.

Intel Corporation (NASDAQ:INTC)’s long-term growth and success lies on its entry and performance in the smartphonesand tablets industry. Yes, Intel failed to capitalize on the opportunity and entered the market at a very late stage. Despite that, Intel’s current and upcoming low-voltage chips are just too good to ignore.

Oracle Corporation (ORCL), Hewlett-Packard Company (HPQ): Who Gets Hit in the...
Monthly Newsletter Strategy
Download a free copy of our newsletter and see the details inside!
Hedge Fund Resource Center
Billionaire Hedge Funds