Intel Corporation (INTC): This ‘Forever’ Stock Could Return At Least 30%

Warren Buffett is always quick to warn investors about becoming emotionally attached to a stock they own.

To paraphrase the Oracle of Omaha, “That 100 shares of stock doesn’t know that you own it.” I’ve echoed that philosophy on occasion, telling clients that a hundred shares of Cisco Systems, Inc. (NASDAQ:CSCO) won’t tell you it loves you when you come home at night.

But as investors, we sometimes find ourselves gravitating toward the same group of stocks because of their dependable performance. Buffett himself is guilty of this with holdings such as The Coca-Cola Company (NYSE:KO) or The Washington Post Company (NYSE:WPO), which have served as two of Berkshire Hathaway Inc. (NYSE:BRK.A) (NYSE:BRK.B) stalwart holdings for decades.

At StreetAuthority, we refer to these names as “Forever” stocks. But there’s one stock in particular I find myself coming back to time and time again: Intel Corporation (NASDAQ:INTC).

Long Live The PC
Fifteen years ago, the strongest argument for owning shares of Intel was that the company manufactured the brains for 80% of the world’s computers. As the dot-com bubble grew bigger, doe-eyed investors uttered that phrase and others as they drove tech stock prices and price-to-earnings (P/E) ratios up to unsustainable, nosebleed heights.

The bubble popped, attitudes soured, and tech shares drifted around in a bear market that seemed to have no end. However, I haven’t used a computer any less since then — and most likely, neither have you. Although personal computing has evolved from desktop to laptop to smartphone to tablet, the need for processing speed has not disappeared.

It’s clear Intel Corporation (NASDAQ:INTC)’s making the right moves, but you would never know it by the price action of the stock. 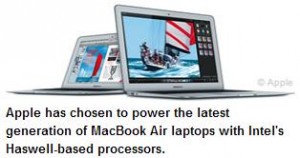 Imagine getting a nearly 10% pay raise every year for the past five years. Intel shareholders did. And the current levels of the stock price are an excellent entry point.

Signs Of Growth
Intel Corporation (NASDAQ:INTC) is launching a slew of new products, most notably its Haswell architecture CPUs (central processing units) and Atom-based system-on-chip (SoC) devices. The new Haswell platform uses only 17 watts, less than half the average power consumption of the current generation of computer CPUs. Apple Inc. (NASDAQ:AAPL) is basing its newest generation of MacBook Air laptops on this processor, boosting their performance markedly.

Cisco Systems, Inc. (CSCO)’s Growth Should Continue With an Improving...

Is Apple Inc. (AAPL)’s iPhone 5 The Most Anti-Social Phone Ever?

Markel Corporation (MKL) Puts Its Money Where Its Mouth Is
Monthly Newsletter Strategy
Download a free copy of our newsletter and see the details inside!
Hedge Fund Resource Center
Billionaire Hedge Funds