Intel Corporation (INTC): This Chip Maker Is Branching Out

Intel Corporation (NASDAQ:INTC) has long been tied at the hip to Microsoft Corporation (NASDAQ:MSFT). While that worked well for a long time, the chip giant is branching out and making a smart move by getting cozy with Google Inc (NASDAQ:GOOG) and its Android operating system.

Intel Corporation (NASDAQ:INTC) and Microsoft are the foundation on which most of the world’s computers are built. The pair found each other early on in the personal computer revolution and together rode the industry’s wave to dominant, worldwide positions. Microsoft, for example, had revenues of nearly $70 billion in fiscal 2012 while Intel Corporation (NASDAQ:INTC)’s top line chimed in at just over $53 billion.

Those are big numbers from companies with still dominant positions in the technology industry. Clearly personal computers were good to the pair. However, the stock market looks forward, not backward, and all of that is in the past. Today, both Microsoft and Intel Corporation (NASDAQ:INTC) shares trade at roughly the same level they did five years ago. 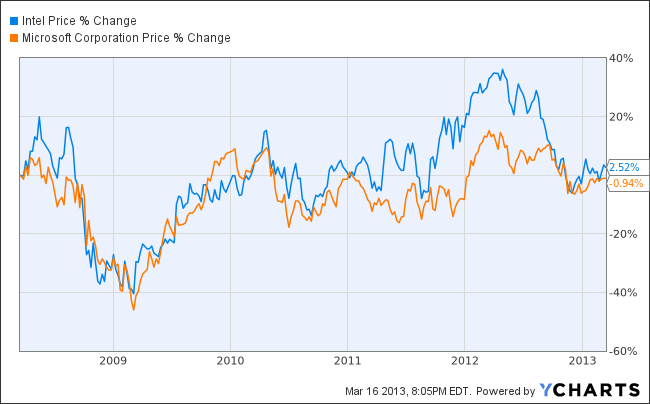 The future today is in mobile devices. This revolution started with the lowly cell phone, but quickly sped up with the Internet capable smart phone. Apple Inc. (NASDAQ:AAPL)’s iPhone was the device that kick started the movement. The company’s iPad furthered the push away from a computer tied to a wall by a power cord.

Interestingly, the iPad and similar devices are essentially casual computers. They can do enough that most people don’t need to have a computer. The piece that cements this is mobile Internet connectivity, and this has led to a decline in personal computer sales.

Apple, however, isn’t the big fish in the mobile space. The big name is Google, whose Android operating system powers the vast majority of mobile devices sold today. While there have been off and on rumors of Apple and Intel Corporation (NASDAQ:INTC) teaming up, which would indeed be good for Intel Corporation (NASDAQ:INTC), such a union doesn’t have the potential of an Intel/Google alliance.

Luckily for Intel, Google’s business model is an open one. The company gladly partners with other companies in an effort to reach the broadest possible audience. Google, for the most part, makes its money via advertising and, with Android, royalties on application sales.

Mobile has been the Achilles heel of both Microsoft and Intel, as neither has been able to fully penetrate that market. Microsoft has pushed aggressively to break into the top echelon of mobile operating systems, recently pairing with Nokia to power that company’s Lumia smart phone. The outcome of this effort is still up in the air, but Nokia’s dominance in emerging markets holds great promise.

We may use your email to send marketing emails about our services. Click here to read our privacy policy.
Related Insider Monkey Articles
Apple Inc. (AAPL): When Will It Boost Its Dividend? Soon.