We track 13F filings from hedge funds and other notable investors for a variety of purposes, including development of investment strategies (we have found, for example, that the most popular small cap stocks among hedge funds outperform the market by an average of 18 percentage points per year). We can also look at the top picks of individual fund managers, including stocks with relatively high dividend yields, and treat these as “free recommendations” which might be researched further. Here are billionaire Ray Dalio’s Bridgewater Associates’ five largest holdings as of the end of December in stocks whose dividend yields are 3.5% or higher going by current prices and recent dividend policy (or see the full list of stocks Bridgewater reported owning):

The fund increased its holdings of CA, an $11 billion market cap application software company, to a total of 1.1 million shares. CA pays a dividend yield of 4%, following the increase in its quarterly dividend payment in early 2012 to 25 cents per share. We would note, however, that the stock price has fallen 10% in the last year and in its most recent quarter revenue and earnings were both down compared to the same period in the previous fiscal year. Cliff Asness’s AQR Capital Management was also buying CA in Q4 2012, with 2.7 million shares in its portfolio according to its own filing (find Asness’s favorite stocks). 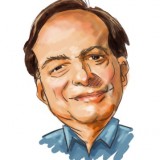 Dalio and his team owned 2.1 million shares of Staples (NASDAQ:SPLS), another company whose decline in share price (down 19% in the last year, as the company has continued to suffer competition from Amazon.com (NASDAQ:AMZN) and other peers) has left it with a high yield for now. 11% of the outstanding shares are held short as many market players are bearish. Analyst expectations imply a forward P/E of 9, so if Staples can hit those targets it might be a value prospect. Pzena Investment Management, managed by Richard Pzena, was another major shareholder at Staples.

Bridgewater was buying shares of Freeport-McMoRan Copper & Gold (NYSE:FCX) signaling that it approves of the company’s diversification into oil and gas through its acquisitions of two energy companies. The current dividend yield is 3.8%; the stock price reacted negatively to the acquisition announcement on concerns over price and a drift in focus. The earnings multiples are also low, however, and it’s possible that the market overreacted. Billionaire Leon Cooperman’s Omega Advisors was buying Freeport-McMoRan Copper & Gold (NYSE:FCX) in the fourth quarter of 2012 (research more stocks Omega was buying).