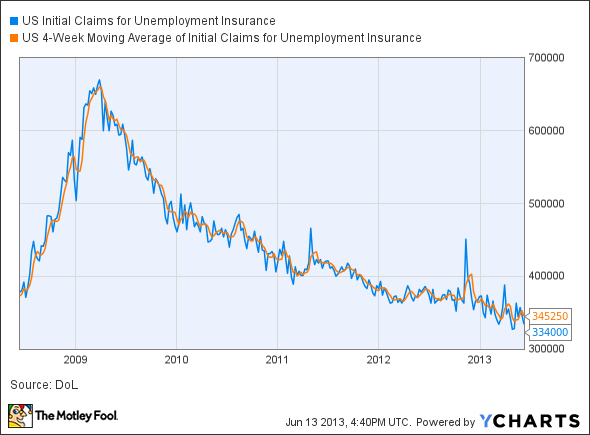 Today’s Dow leader
Today’s Dow leader is Intel Corporation (NASDAQ:INTC), up 1.4%. The chip maker scored a win earlier this week when Samsung announced that Intel will provide the chips for its Galaxy Tab 3. Intel Corporation (NASDAQ:INTC) has historically focused on chips for servers and PCs. It has been forced to play catch-up in the mobile market as QUALCOMM, Inc. (NASDAQ:QCOM) has taken a hefty lead. Intel was one of many companies banking on a refresh cycle driven by Windows 8. That hasn’t been the case yet. In fact, Windows 8 is said to have contributed to the first quarter’s drop in PC sales — the worst drop in PC sales ever. It will be interesting to see whether Microsoft’s update to Windows 8 changes people’s perceptions. If so, Intel Corporation (NASDAQ:INTC) will be in a prime position to benefit.

When it comes to dominating markets, it doesn’t get much better than Intel’s position in the PC microprocessor arena. However, that market is maturing, and Intel must find new avenues for growth. In this premium research report on Intel, a Motley Fool analyst runs through all of the key topics investors should understand about the chip giant. Click here now to learn more.

Also among the Dow’s winners today is AT&T Inc. (NYSE:T), up 1.4%. AT&T Inc. (NYSE:T) has been pursuing new offers to try to win over customers from Verizon Communications Inc. (NYSE:VZ) and T Mobile USA, including a deal to trade in older smartphones for a discount on the iPhone 5. AT&T needs the offers, as Verizon has been doing well in adding new customers. Investors have noticed the disparity in performance between the two, and some are betting that AT&T’s stock will falter. Currently, 1.5% of all shares of AT&T are sold short.

The article These 2 Stocks Are Driving the Dow Higher originally appeared on Fool.com.

Dan Dzombak can be found on Twitter @DanDzombak or on his Facebook page, DanDzombak. He has no position in any stocks mentioned. The Motley Fool recommends Intel. The Motley Fool owns shares of Intel, Microsoft, and Qualcomm.