One of the largest investing stories over the last several years is the decline of the PC and the rise of mobile computing. One of the companies with the most to lose is Intel Corporation (NASDAQ:INTC) which controls 85.2% of the PC microprocessor market and receives 64% of its revenues from that sector (J.P. Morgan). Furthermore, Intel Corporation (NASDAQ:INTC) made a large bet on Ultrabooks that hasn’t panned out yet, and likely never will. 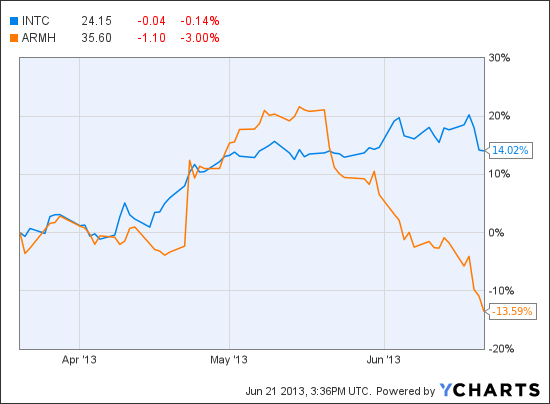 However, this change has not been as big as some analysts argue. A few even argue that Intel will eliminate the ARM Holdings plc (ADR) (NASDAQ:ARMH)’s architecture’s like it did PowerPC. The key point here is that the success that Intel has happened because of its technological edge. Over the last several years, Intel Corporation (NASDAQ:INTC) dumped billions of dollars per year into researching ever better microprocessors and performance has risen proportionality. They managed to out-research IBM, which is quite a feat, and may well out innovate ARM Holdings plc (ADR) (NASDAQ:ARMH).  However, the PC and mobile sectors do not work the same way.

How will ARM and Intel compete?

The historical key in PC’s has been strong demand for processing power. Consumers will pay to use their PC’s in computationally complex ways.  The demand for performance in the mobile market is much smaller. Consumers just don’t push the envelope as far. This is precisely why ARM has done so well.  It’s true that consumers are willing to pay for extra performance in the form of longer battery, and its Intel’s solution to this problem that excited people so much.  However, how much battery life does someone really need?  Again, once we get all-day battery life, we’ll be hitting diminishing returns pretty hard. We will soon hit that point.

So if Intel Corporation (NASDAQ:INTC) and ARM Holdings plc (ADR) (NASDAQ:ARMH) designs are both powerful enough and efficient for most users, how will they compete? There is only one logical answer — Price.  Herein lies the problem for Intel. Historically, it has always been the more expensive chip producer. It has focused on out-performing its competitors, while letting them under-price it. However, if it wants to compete in the mobile space long-term. It simply can’t do that. It is already heading in that direction. Its new processors are substantially cheaper than previous iterations. Furthermore, most of the potential smartphone growth is in the developing world in places such as India and Brazil.. These consumers there don’t already have a smartphone because they are poor, and poor consumers are more responsive to price than wealthier ones.

What does this mean for Intel

No matter how you slice it, if Intel Corporation (NASDAQ:INTC) and ARM Holdings plc (ADR) (NASDAQ:ARMH) enter a price war, this will cut into both companies’ margins. Intel simply won’t be able to keep them around 60%. They are already starting to fall, going from 64% to 56.2% (ft.com).  This will likely have two main outcomes. 1) It will cause downward pressure on Intel’s investment and hence its ability to create better chips than its competitors.  2) It will reduce Intel’s profits, and hence its ability to return value to shareholders. Intel will likely remain profitable, but it won’t have the moat it had.

Related Insider Monkey Articles
Is There Any Competition Between Advanced Micro Devices, Inc. (AMD) and Intel...Trouble Ahead for Microsoft Corporation (MSFT)?Nokia Corporation (ADR) (NOK)’s Future Is on the Table
Apple Inc. (AAPL) 1 Could Fetch $500,000 or More at AuctionWhat’s Wrong With Oracle Corporation (ORCL)?I Admit It: Qihoo 360 Technology Co Ltd (QIHU) Is a Real Threat to Baidu.com...
Monthly Newsletter Strategy
Download a free copy of our newsletter and see the details inside!
Hedge Fund Resource Center
Billionaire Hedge Funds