Companies that make products that perform mundane tasks such as adding flavor and texture to your food can really improve portfolio performance over the long term. These products never go out of fashion unlike computers and electronics. The three companies below possess qualities that make their stock worthy of long-term ownership.

Ingredion Inc (NYSE:INGR) makes “starches, sweeteners, texturants, and nutritionals” that go into the taste and texture of items such as food, medicine and corrugated cardboard. The crispiness of crackers and the smoothness of baby powders may come from materials that Ingredion Inc (NYSE:INGR) makes and sells. This company also sells chemicals that preserve food texture during freezing.

Ingredion’s list of managers includes people with years of experience in the company. Many of them started with Ingredion Inc (NYSE:INGR)’s predecessor company CPC and rose through the ranks to their current position. Others like Chairman, President, and CEO Ilene S. Gordon came in from the packaging industry, which Ingredion serves.

Moreover, Ingredion Inc (NYSE:INGR) manages their company on a decentralized geographic basis or on a region to region basis, enabling it to more efficiently respond to local market conditions. This better positions the company to capitalize on emerging markets growth. Ingredion’s century of experience as a global company can help in this regard. 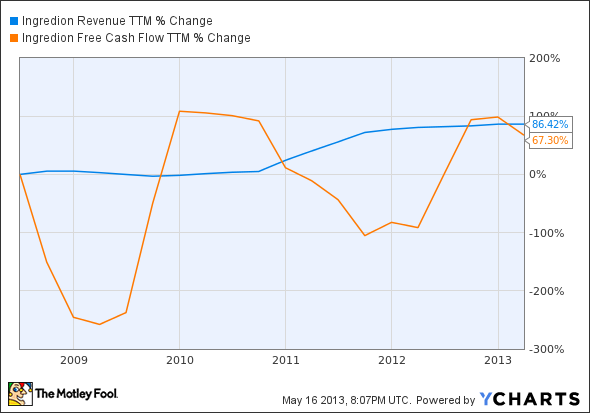 In its most recent quarter, Ingredion increased revenue less than 1%. Its operating cash flow sunk into the negative versus the same time last year due to a large increase in working capital and accounts receivable. Weaknesses in South America and currency headwinds served as a drag on growth. Volume dropped across Ingredion Inc (NYSE:INGR)’s geographic segments; however, Ingredion’s pricing power still enabled the company to increase overall revenue.

A slowing global economy and uncertainty surrounding corn prices enticed management to issue a cautious outlook for 2013. However, over the long term increasing global demand for food could serve as a catalyst for superior long-term growth in the company’s stock price.

In the meantime shareholders can enjoy a 2.1% dividend yield representing just 16% of 2012 free cash flow. The stock trades at just 13 times earnings as of this writing; a plus in this new raging bull market we reside in.

More than salt and pepper

McCormick & Company, Incorporated (NYSE:MKC) employees own a 21% stake in the company through its 401K plan. This increases a sense of loyalty and pride among employees and managers who share in the risks and rewards of the business. 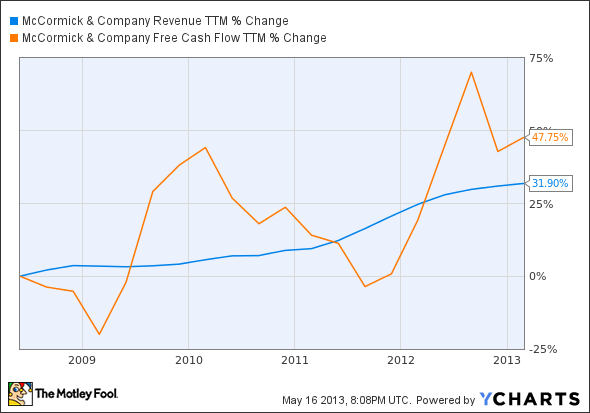 McCormick pays out roughly half of its free cash flow out in dividends. As of this writing McCormick pays its shareholders $1.36 per share per year translating into a 1.9% dividend yield.

Like Ingredion Inc (NYSE:INGR), McCormick & Company, Incorporated (NYSE:MKC) faces a softening global economy specifically within McCormick’s industrial segment. Consumers are increasingly apprehensive about eating out with the combination of higher prices and a smaller paycheck. However, McCormick saw an increase of 7% in its consumer business as the result of people eating in more.