Ingevity Corporation (NGVT): Are Hedge Funds Right About This Stock?

As we already know from media reports and hedge fund investor letters, many hedge funds lost money in October, blaming macroeconomic conditions and unpredictable events that hit several sectors, with healthcare among them. Nevertheless, most investors decided to stick to their bullish theses and their long-term focus allows us to profit from the recent declines. In particular, let’s take a look at what hedge funds think about Ingevity Corporation (NYSE:NGVT) in this article.

Ingevity Corporation (NYSE:NGVT) has experienced an increase in enthusiasm from smart money in recent months. NGVT was in 19 hedge funds’ portfolios at the end of September. There were 17 hedge funds in our database with NGVT holdings at the end of the previous quarter. Our calculations also showed that NGVT isn’t among the 30 most popular stocks among hedge funds. 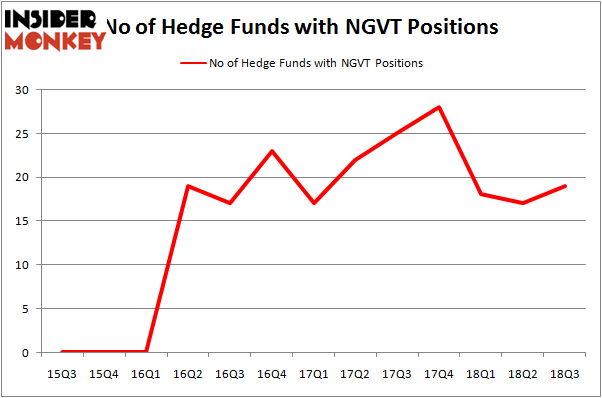 The largest stake in Ingevity Corporation (NYSE:NGVT) was held by Chilton Investment Company, which reported holding $75.5 million worth of stock at the end of September. It was followed by Royce & Associates with a $10.6 million position. Other investors bullish on the company included Columbus Circle Investors, Two Sigma Advisors, and Diker Management.

Consequently, some big names have jumped into Ingevity Corporation (NYSE:NGVT) headfirst. Diker Management, managed by Mark N. Diker, established the largest position in Ingevity Corporation (NYSE:NGVT). Diker Management had $7.4 million invested in the company at the end of the quarter. Dmitry Balyasny’s Balyasny Asset Management also made a $5.8 million investment in the stock during the quarter. The other funds with brand new NGVT positions are Guy Shahar’s DSAM Partners, Israel Englander’s Millennium Management, and Charles Paquelet’s Skylands Capital.

As you can see these stocks had an average of 27.5 hedge funds with bullish positions and the average amount invested in these stocks was $967 million. That figure was $148 million in NGVT’s case. Perspecta Inc. (NYSE:PRSP) is the most popular stock in this table. On the other hand Turquoise Hill Resources Ltd (NYSE:TRQ) is the least popular one with only 18 bullish hedge fund positions. Ingevity Corporation (NYSE:NGVT) is not the least popular stock in this group but hedge fund interest is still below average. This is a slightly negative signal and we’d rather spend our time researching stocks that hedge funds are piling on. In this regard PRSP might be a better candidate to consider a long position.