We can judge whether Imperial Oil Limited (NYSE:IMO) is a good investment right now by following the lead of some of the best investors in the world and piggybacking their ideas. There’s no better way to get these firms’ immense resources and analytical capabilities working for us than to follow their lead into their best ideas. While not all of these picks will be winners, research shows that these picks historically outperformed the market when we factor in known risk factors.

Is Imperial Oil Limited (NYSE:IMO) a healthy stock for your portfolio? The best stock pickers are getting more bullish. The number of bullish hedge fund bets improved by 2 recently. Our calculations also showed that IMO isn’t among the 30 most popular stocks among hedge funds.

What does the smart money think about Imperial Oil Limited (NYSE:IMO)?

At the end of the third quarter, a total of 17 of the hedge funds tracked by Insider Monkey were bullish on this stock, a change of 13% from one quarter earlier. The graph below displays the number of hedge funds with bullish position in IMO over the last 13 quarters. With the smart money’s capital changing hands, there exists a select group of notable hedge fund managers who were upping their holdings significantly (or already accumulated large positions). 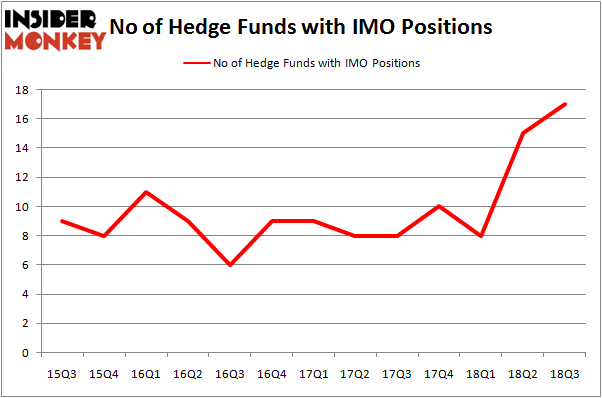 Among these funds, Point72 Asset Management held the most valuable stake in Imperial Oil Limited (NYSE:IMO), which was worth $46.5 million at the end of the third quarter. On the second spot was D E Shaw which amassed $31 million worth of shares. Moreover, AQR Capital Management, GLG Partners, and Bridgewater Associates were also bullish on Imperial Oil Limited (NYSE:IMO), allocating a large percentage of their portfolios to this stock.

As aggregate interest increased, key money managers were breaking ground themselves. Two Sigma Advisors, managed by John Overdeck and David Siegel, established the largest position in Imperial Oil Limited (NYSE:IMO). Two Sigma Advisors had $5 million invested in the company at the end of the quarter. George Zweig, Shane Haas and Ravi Chander’s Signition LP also made a $0.5 million investment in the stock during the quarter. The other funds with new positions in the stock are Jim Simons’s Renaissance Technologies, Ken Griffin’s Citadel Investment Group, and Andrew Weiss’s Weiss Asset Management.

As you can see these stocks had an average of 32.25 hedge funds with bullish positions and the average amount invested in these stocks was $992 million. That figure was $111 million in IMO’s case. Ingersoll-Rand Plc (NYSE:IR) is the most popular stock in this table. On the other hand AvalonBay Communities Inc (NYSE:AVB) is the least popular one with only 26 bullish hedge fund positions. Compared to these stocks Imperial Oil Limited (NYSE:IMO) is even less popular than AVB. Considering that hedge funds aren’t fond of this stock in relation to other companies analyzed in this article, it may be a good idea to analyze it in detail and understand why the smart money isn’t behind this stock. This isn’t necessarily bad news. Although it is possible that hedge funds may think the stock is overpriced and view the stock as a short candidate, they may not be very familiar with the bullish thesis. In either case more research is warranted.

Should You Buy The Hanover Insurance Group, Inc. (THG)?
Monthly Newsletter Strategy
Download a free copy of our newsletter and see the details inside!
Hedge Fund Resource Center
Related News
Is Imperial Oil Limited (USA) (IMO) A Good Stock To Buy? 11 Countries With The Worst Modern Music In The World The Top 5 Robo Advisor Apps of 2018 Five Reasons You Need a Day-Trading Mentor
Billionaire Hedge Funds