No doubt there are a lot of 3-D TVs in living rooms around the world, but customers don’t seem keen on paying for 3-D content to go along with them.

The interesting channel to watch now that ESPN is out of 3-D will be the fate of 3net, a partnership between IMAX Corporation (USA) (NYSE:IMAX), Sony Corporation (ADR) (NYSE:SNE), and Discovery. The channel was built to be focused on 3-D, and recently launched a production arm to create 3-D and 4K content. Presumably, the loss of ESPN will hurt demand for other 3-D channels like 3net, and it will be interesting to see what the fate of this venture is.

What does this mean for the big screen?

It’s not only the small screen where 3-D has struggled. The big screen saw an explosion of 3-D content after the success of Avatar in 2010, as IMAX Corporation (USA) (NYSE:IMAX) and RealD (NYSE:RLD) expanded their offerings. But, since then, the industry has been more selective about how it uses 3-D. Batman director Christopher Nolan shunned 3-D, and hits like The Hunger Games and Skyfall weren’t made in 3-D, meaning just one of last year’s top four films were 3-D.

You can see below that the decline of 3-D has had a huge impact on RealD (NYSE:RLD)’s revenue and income. 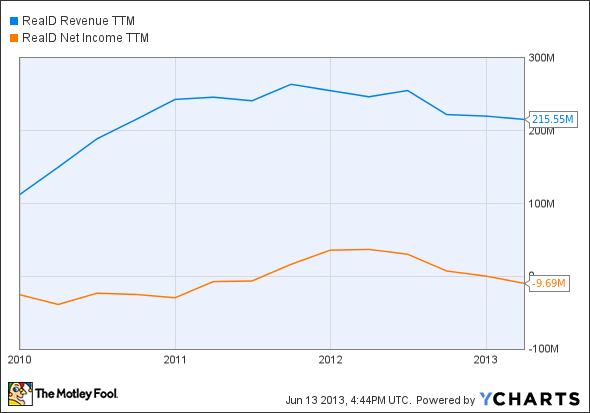 The company was counting on 3-D TV technology to grow revenue, as well, so the loss of ESPN is another blow for RealD (NYSE:RLD).

3-D won’t die completely, but it’s apparent that it’s hit a major wall right now. Consumers aren’t willing to pay for 3-D TV, and the format isn’t a huge success on the big screen right now, either. The huge projections people made about 3-D adoption appear to be completely wrong and, right now, this looks like an epic failure.

The article Why 3-D TV Has Been an Epic Failure originally appeared on Fool.com and is written by Travis Hoium.