Over the past decade, IMAX Corporation (USA) (NYSE:IMAX) has become synonymous with the premium experience of watching Hollywood blockbusters – on a screen as high as 98 feet with over 40 speakers. It wasn’t always this way – for the first three decades after its debut in 1971, IMAX was restricted to special presentations at museums and educational venues, since technical limitations kept films short, at approximately 40-50 minutes.

Propelled by rising demand for its projection systems, increasingly technically impressive films, and evolving 3D technology, has IMAX become a perfect stock to own to capitalize on this revolution of modern film entertainment?

How does IMAX make money?

During the fourth quarter of 2012, IMAX Corporation (USA) (NYSE:IMAX) earned an adjusted 23 cents per share, easily topping the analyst estimate of 16 cents. Net income grew 105.9% from the prior year quarter to $12.9 million.

However, IMAX’s revenue from systems sales dropped 18.5% to $24.3 million, since it only installed 14 new systems in theaters during the fourth quarter, as opposed to 17 a year earlier.

The remainder of IMAX’s revenue is generated from periodic system maintenance fees, theater operations, and its own branded films.

“Our 2013 objectives are straightforward — continue to expand our footprint worldwide, maximize the scalability of our business and further leverage our differentiated end-to-end technology platform to enable more leading filmmakers and studios to create an entertainment experience that cannot be found anywhere else.” 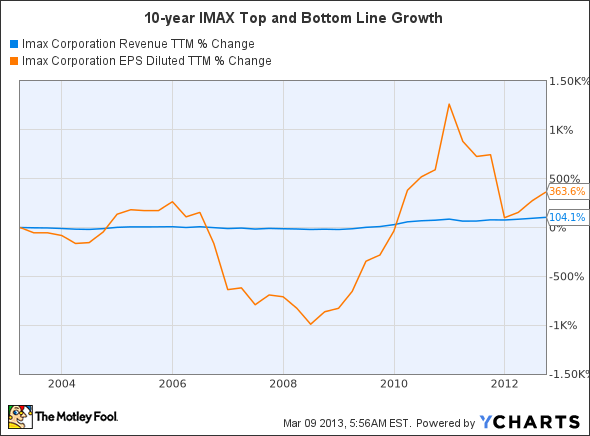 Although earnings are slightly inconsistent, mainly due to the recession, it was still profitable for seven of the past ten years. Looking forward, analysts at Thomson Financial estimate that IMAX will earn $0.98 per share for fiscal 2013, and follow that up with $1.35 per share in 2014.

In my opinion, these positive catalysts are just the beginning for IMAX, as demand for its large projection systems rises domestically as well as overseas.

As long as IMAX is on fire, then it needs some good, effects-laden Hollywood offerings to act as kindling to keep it burning. Last year was a strong year for movie studios – blockbusters such as The Hunger Games, The Avengers and The Dark Knight Rises all drew in record crowds. This year, films such as Skyfall, The Hobbit, Jack the Giant Slayer and Oz: The Great and Powerful are continuing the trend.

IMAX is an excellent play on apparent insatiability of movie watchers for one main reason: it doesn’t have take the multimillion dollar risks that studios such as Time Warner Cable Inc (NYSE:TWC) or The Walt Disney Company (NYSE:DIS) have to shoulder to create films. IMAX Corporation (USA) (NYSE:IMAX) merely has to use its technology to show the films, and with each film shown, its technology is showcased to more users, helping its popularity spread further.

3D technology, which became immensely popular after the 2009 release of James Cameron’s Avatar, has also fueled demand for the 3D IMAX experience, which is considered the top-tier experience for viewing major film releases.

Considering Disney’s ambitious plans for its Marvel franchises and its upcoming Star Wars sequels, I believe that “3D IMAX” will remain the premium standard for a long time.

Thanks to its niche market and peerless brand recognition, IMAX does not have any direct competitors – rather, they can be considered partners that help spread its brand. However, IMAX’s growth can still be measured against other major movie theater operators, to see how it stands fundamentally.

Based on these metrics, we can see that IMAX is trading at a premium, albeit a well-deserved one, considering its beefier margins and lower debt levels. While Cinemark Holdings, Inc. (NYSE:CNK) has grown over the past five years, its growth has been slow in comparison to IMAX. The reason is simple: whereas Cinemark Holdings, Inc. (NYSE:CNK) and Regal Entertainment Group (NYSE:RGC) must increase their expenses to adopt IMAX technology in their aging theaters, IMAX simply profits from the shift. 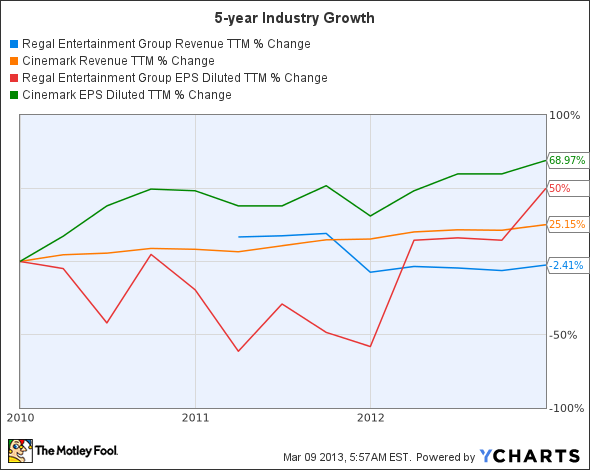 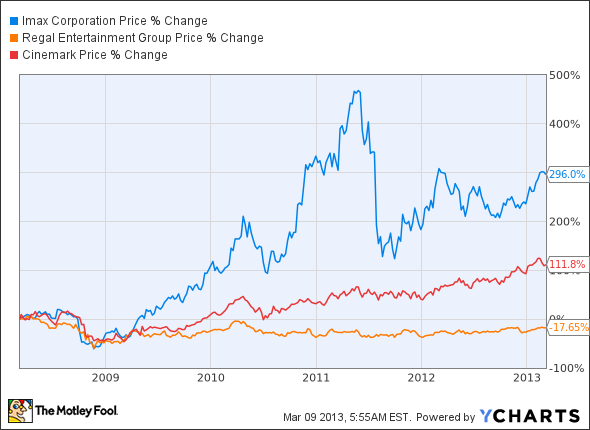 Investing in IMAX depends on one central thesis – will movies get progressively bigger and more dazzling, requiring the largest screens enhanced with 3D technology to view in their fully intended glory?

If so, then IMAX – with its growing brand, insulated business model, coupled with strong top and bottom line growth – just might be one of the strongest investments of this decade.