The euro hit its 2 year low against the  dollar this past week. The Eurozone debt crisis brought more bad news for European companies. But this is just as bad a news for the US MNCs, which draw a big chunk of their revenues from Europe, as it is for European corporations. The dollar also rose against Swiss francs, Chinese Yuan and Japanese Yen. The President of Federal Reserve Bank of St. Louis hinted this year that interest rates may increase by late 2013. It will be safe to anticipate that higher interest rates will translate into higher capital inflow from abroad, thus further strengthening the dollar. Nonetheless, let’s not rule out the chances that the Fed might as well ease the monetary policy this year (decrease interest rates) amid the rising unemployment rates, which will mean a weaker dollar by year end. What the future holds is left to the future. For this discussion only, let’s assume the greenback strengthens.

If you don’t understand why this is bad news, let me make it easy for you. US companies with domestic operations or those importing from foreign countries will win with a stronger greenback. Contrarily, when companies with major operations outside of the US will translate their revenues from foreign currencies to dollars, a weak foreign currency would translate into lesser dollars. Hence, lower revenues in dollar terms. There!  Easy!

Let’s test this proposition with an example. Take for instance Yum! Brands (NYSE:YUM), the owner of KFC and Pizza Hut food chains, that at present draws 66% of its revenues from the International market. Without taking foreign currency (FX) translations into consideration, Yum! Brands saw its worldwide revenues increase by 7% for FY2011. Bring FX translations in the picture and the revenue growth boosts to 11.3%. This is because of the favorable foreign currency movements during 2011. 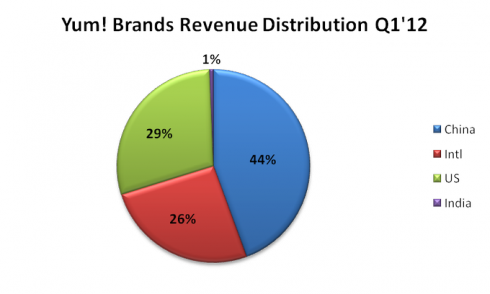 Yum! currently generates 44% of its revenue from China. During 2011, the US dollar depreciated against the Chinese Yuan (CNY). By year end the indirect quote averaged CNY 6.31/USD. But this year the USD started to climb against CNY and it followed almost the same trend against other currencies as well.

Does this mean Yum! Brand’s next quarter USD sales are likely to suffer if USD appreciates further? In all likelihood, yes!

You may be lovin’ it but the pioneer of burger chains, McDonald’s (NYSE:MCD), too isn’t immune to the negative impact of foreign currency movements. McDonald’s generates more than 68% of its revenues from its international company-owned restaurants and franchises. McDonald’s CFO, Peter Bensen, warned during this year’s Q1 earnings announcement that, because of unfavorable foreign currency translations, the company’s second and third quarter EPS may be negatively impacted by $0.05 and $0.07 respectively. The negative impact for the whole year may range from $0.12 to $0.14.

Unfavorable foreign exchange translations may also create a worry for peer food chains that otherwise generate much lower revenues from their international operations. Domino’s Pizza, Inc. (NYSE:DPZ) received only 12% in revenues from its international business in the first quarter of 2012. Its total revenues increased by 7.2% if we don’t take FX translation into account. Including the FX impact, the revenue increase comes out to be lower by 110 basis points.

Likewise, Dunkin’ Brands Group (NASDAQ:DNKN), owner of Dunkin’ Donuts and Baskin-Robbins drew 19% of its revenues from international markets in first quarter of 2012. However, Dunkin’ Brands reported a loss of $4.5 million from unfavorable FX translation for the same quarter.

Quick Roundup: An appreciating dollar can cause future earnings growth of these and many other MNCs to suffer. Hedging against the foreign currency risk may help, but it doesn’t alwayshelp. On the contrary, if the dollar weakens in the coming quarters, these MNCs will be reporting better than expected earnings. I say we look at earnings growth prior to foreign currency translation as that would prove to be a better measure of performance whether the inevitable FX movements are favorable or unfavorable. Make your picks wisely!

Is Yum! Brands a Good Stock to Buy?
Monthly Newsletter Strategy
Download a free copy of our newsletter and see the details inside!
Hedge Fund Resource Center
Billionaire Hedge Funds