Before we spend days researching a stock idea we’d like to take a look at how hedge funds and billionaire investors recently traded that stock. S&P 500 Index ETF (SPY) lost 8.7% through October 26th. Forty percent of the S&P 500 constituents were down more than 10%. The average return of a randomly picked stock in the index is -9.5%. This means you (or a monkey throwing a dart) have less than an even chance of beating the market by randomly picking a stock. On the other hand, the top 25 most popular S&P 500 stocks among hedge funds had an average loss of 8.8%. In this article, we will take a look at what hedge funds think about ICICI Bank Limited (NYSE:IBN).

ICICI Bank Limited (NYSE:IBN) shares haven’t seen a lot of action during the third quarter. Overall, hedge fund sentiment was unchanged. The stock was in 22 hedge funds’ portfolios at the end of the third quarter of 2018. The level and the change in hedge fund popularity aren’t the only variables you need to analyze to decipher hedge funds’ perspectives. A stock may witness a boost in popularity but it may still be less popular than similarly priced stocks. That’s why at the end of this article we will examine companies such as Royal Caribbean Cruises Ltd. (NYSE:RCL), CRH PLC (NYSE:CRH), and Zimmer Biomet Holdings Inc (NYSE:ZBH) to gather more data points.

At the end of the third quarter, a total of 22 of the hedge funds tracked by Insider Monkey were long this stock, no change from the second quarter of 2018. On the other hand, there were a total of 24 hedge funds with a bullish position in IBN at the beginning of this year. With hedgies’ positions undergoing their usual ebb and flow, there exists a few noteworthy hedge fund managers who were boosting their stakes substantially (or already accumulated large positions). 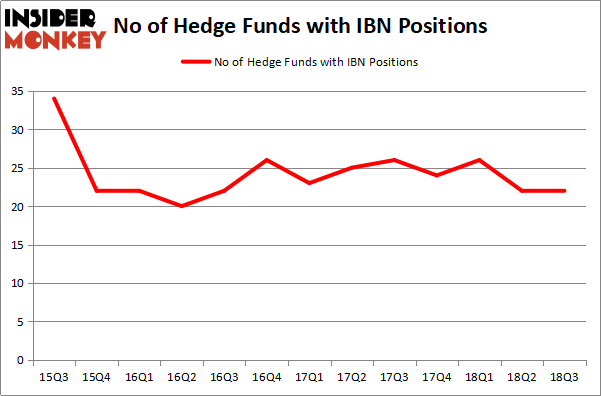 Seeing as ICICI Bank Limited (NYSE:IBN) has faced a decline in interest from the entirety of the hedge funds we track, we can see that there was a specific group of money managers that elected to cut their entire stakes last quarter. It’s worth mentioning that Ben Levine, Andrew Manuel and Stefan Renold’s LMR Partners dumped the biggest stake of the “upper crust” of funds watched by Insider Monkey, comprising an estimated $1.6 million in stock, and Gavin Saitowitz and Cisco J. del Valle’s Springbok Capital was right behind this move, as the fund cut about $0.6 million worth. These transactions are important to note, as aggregate hedge fund interest stayed the same (this is a bearish signal in our experience).

As you can see these stocks had an average of 29 hedge funds with bullish positions and the average amount invested in these stocks was $1.16 billion. That figure was $426 million in IBN’s case. Royal Caribbean Cruises Ltd. (NYSE:RCL) is the most popular stock in this table. On the other hand CRH PLC (NYSE:CRH) is the least popular one with only 7 bullish hedge fund positions. ICICI Bank Limited (NYSE:IBN) is not the least popular stock in this group but hedge fund interest is still below average. This is a slightly negative signal and we’d rather spend our time researching stocks that hedge funds are piling on. In this regard RCL might be a better candidate to consider a long position.