Diversified holding company Icahn Enterprises, L.P. (NASDAQ:IEP), led by prolific activist investor Carl Icahn, recently nearly tripled its dividend from $1.40 to $4.00 per share. That bumps its yield up to nearly 5% at current prices, and income investors have taken notice. Considering that the stock has risen nearly 100% over the past twelve months, trades at 13 times trailing earnings, and has an iconic, aggressive leader who has made it his mission in life to maximize shareholder value at stagnant companies, is Icahn Enterprises a screaming buy for dividend investors?

Icahn Enterprises’ business model is similar to that of Warren Buffett’s firm Berkshire Hathaway Inc. (NYSE:BRK.A) – it doesn’t actually produce a product, but rather invests in companies across a variety of industries. In other words, the company resembles a mutual or hedge fund – a basket of investments that are actively managed by its CEO.
Let’s take a look at how the two companies have invested in similar and different industries.

While the two companies invest in some similar businesses, it would be incorrect to simply call Carl Icahn a lesser Warren Buffett. Icahn, being an ‘activist’ investor, actively invests heavily in troubled companies which he believes are held back by stagnant management, using his weight to force changes in leadership or execution. Meanwhile, Warren Buffett invests in fundamentally cheap companies and plays a more passive waiting game.

Companies such as Icahn Enterprises and Berkshire Hathaway are extremely hard to value with forward-looking metrics such as forward P/E and PEG ratio, since it is nearly impossible to forecast the value of all its investments as well as predict upcoming divestments at the same time. However, we can easily value its past performance. Let’s see how Icahn measures up to Berkshire fundamentally.

Icahn actually puts up a strong fight against Berkshire, and is fundamentally stronger in most categories. However, Berkshire still beats out Icahn with lower debt levels and a healthier price-to-book valuation. 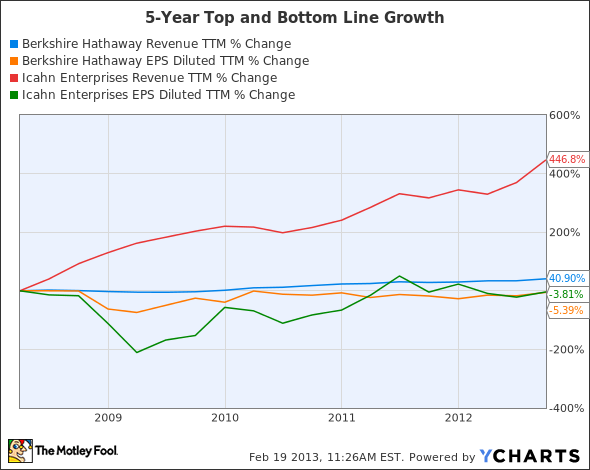 Now.. show me the money! (Or depositary units!)

Icahn Enterprises originally paid $0.40 cash per share plus $1.00 in depositary units, but the newly introduced $4.00 annual dividend will be paid in either cash or depositary units. Receiving depositary units would be the equivalent of a DRIP (dividend reinvestment program) at a brokerage, where cash dividends are automatically used to purchase more shares of the same company.

Shareholders have until March 14 to decide on the form of the payment they prefer, but if all of Icahn’s shareholders elected for a cash payment, the company would need to pay out $420 million in dividends. As a vote of confidence for his own company, Icahn stated that he would accept depositary units instead of cash for his 93% stake of the company.