A software glitch led to to delayed refunds for at least 600,000 taxpayers who filed between Feb. 14 and Feb. 22 this year. CEO Bill Cobb offered a sincere apology for this matter, and it was handled expeditiously, but these 600,000+ taxpayers are less likely to use H&R Block in 2014.

Also earlier this year, H&R Block, Inc. (NYSE:HRB) made an attempt to stop Intuit Inc. (NASDAQ:INTU), the maker of TurboTax software, from running two attack commercials on television. Intuit Inc. (NASDAQ:INTU) wanted to point out that many H&R Block tax preparers aren’t professional CPAs, and that many are plumbers, nurses, and retail clerks. The Federal Court denied H&R Block’s request to stop the ads.

H&R Block also has to deal with the stigma that it charges unnecessary compliance fees. Many taxpayers don’t notice this fee, because it’s usually only $2 to $4, which adds up for H&R Block, Inc. (NYSE:HRB). The IRS doesn’t charge a compliance fee, so there’s no reason for H&R Block to have this fee — unless it’s simply looking to add to its revenue.

With inconsistent revenue over the past five years, and only two profitable quarters in the last five, H&R Block is cutting costs rapidly. The company closed 200 underperforming offices, laid off 350 employees, and reduced its retail exposure by pulling out of Wal-Mart completely.

At the same time, H&R Block, Inc. (NYSE:HRB) is returning more capital to shareholders. It has extended its quarterly dividend streak to 203, and it has bought back 12.3 million shares in fiscal year 2013.

H&R Block outperformed peers over the past year, but what about the past five years? Check out this stock chart: 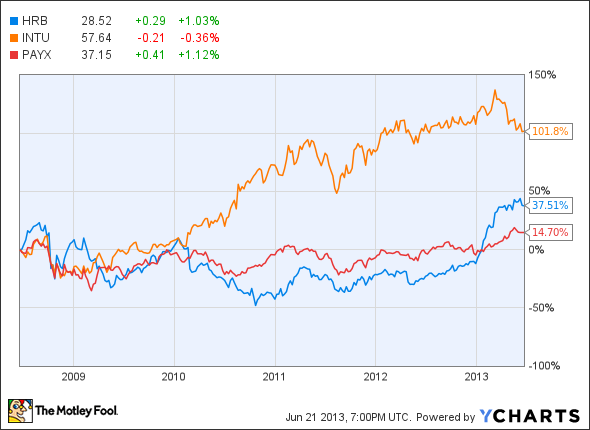 Compared to H&R Block and Paychex, Inc. (NASDAQ:PAYX), Intuit has been the big winner, and for good reason. More than 25 million people used TurboTax in 2012, and it dominates the online market.

H&R Block, Inc. (NYSE:HRB) foresaw industry trends in 2011 and attempted to acquire 2SS Holdings — the developer of tax-prep program TaxACT, a TurboTax rival — for $287.5 million. But a federal judge blocked the acquisition, citing diminishing competition in the space, which would lead to higher prices, collusion, and lower quality. Looking back on that decision, it probably wasn’t fair to H&R Block.