How Would Apple Inc. (AAPL)’s Dividend Measure Up on the Dow?

This just in: Apple Inc. (NASDAQ:AAPL) is a serious option for income investors. Apple stock pays a 3% dividend yield right now thanks to a combination of flagging share prices and a modest policy boost in April’s quarterly check. 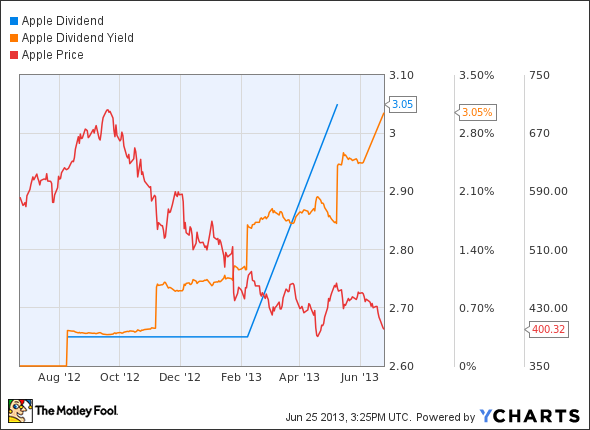 If Apple Inc. (NASDAQ:AAPL) were a member of the Dow Jones Industrial Average , how would its stock stack up against its fellow income-generators? Let’s find out.

Apple Inc. (NASDAQ:AAPL) would boast an above-average yield among the current 30 Dow stocks, but not by a large margin. The average Dow dividend yields 2.7%. That’s just below the median yield of 2.85% offered by oil giant Exxon Mobil Corporation (NYSE:XOM). The iPhone maker would rank in 12th place among a hypothetical 31-member Dow.

How about ranking the Dow by dividend increases? Apple Inc. (NASDAQ:AAPL) boosted its dividend by 15% with just more than a year of payout history under it’s belt, which would be the eighth-most generous raise of the past year. The average one-year boost sits exactly at 15% but is heavily skewed by Cisco Systems, Inc. (NASDAQ:CSCO)‘ more than doubling of its payout policy. Remove the top and bottom boosts, as they do when counting style points in Olympic events, and the adjusted average would be just 12.9%.

So far, so good. If Apple Inc. (NASDAQ:AAPL) can keep its yield north of 2.7% while raising payouts at least 13% per year, the stock will be a better dividend play than your average Dow ticker. But can Apple afford to do all that?

The average Dow member funnels roughly 48% of its free cash flow into dividend payouts. Several of them pump nearly their entire cash flows right back into shareholders’ pockets. This is particularly popular in mature industries where all the easy growth was had decades ago.

Exxon Mobil Corporation (NYSE:XOM) is a bit of an anomaly, as the company manages to stick close to the Dow average here, dishing out 45.7% of its free cash, while the broader oil industry tends to jump around at the whim of changing petroleum prices. Fellow oil-producer Chevron Corporation (NYSE:CVX) isn’t so lucky, spending 86% of its free cash on dividend checks. The roles were the same a year earlier, though the magnitudes were different: Chevron Corporation (NYSE:CVX) invested 41.8% of its 2011 cash flow in dividends, while Exxon’s ratio was an even lower 37%.

Apple plays in a completely different league here. Cupertino pulled in $50.9 billion in operating cash over the last four quarters and spent just $8.3 billion on capital improvements. Only 5.8% of the resulting $42.6 billion in free cash flow was directed to the brand-new dividend policy.

For some added context, fellow tech stock Cisco Systems, Inc. (NASDAQ:CSCO) put 14.6% of its trailing free cash flow into dividends. If you’re looking for stocks with plenty of headroom to increase their dividends, Silicon Valley would be a good place to start.