Before we spend many hours researching a company, we’d like to analyze what insiders, hedge funds and billionaire investors think of the stock first. We would like to do so because the elite investors’ consensus returns have been exceptional. In the following paragraphs, we find out what the billionaire investors and hedge funds think of U.S. Silica Holdings Inc (NYSE:SLCA). Yesterday, Senvest Management disclosed a 5.1% stake in SLCA, more than doubling its position since the end of the second quarter. SLCA lost more than 40% of its value after disappointing earnings and analyst price target cuts during the past few months.

U.S. Silica Holdings Inc (NYSE:SLCA) was in 17 hedge funds’ portfolios at the end of June. SLCA shareholders have witnessed a decrease in activity from the world’s largest hedge funds recently. There were 19 hedge funds in our database with SLCA positions at the end of the previous quarter.

What does the smart money think about U.S. Silica Holdings Inc (NYSE:SLCA)? 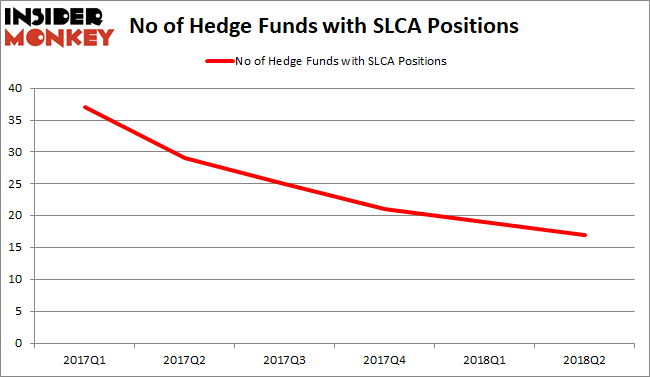 Among these funds, Ariel Investments held the most valuable stake in U.S. Silica Holdings Inc (NYSE:SLCA), which was worth $149 millions at the end of the second quarter. On the second and third spots were Adage Capital Management which amassed $48.1 millions worth of shares, and Maverick Capital. Moreover, Senvest Management, Arosa Capital Management, and Blue Mountain Capital were also bullish on U.S. Silica Holdings Inc (NYSE:SLCA), allocating a large percentage of their portfolios to this stock.

Due to the fact that U.S. Silica Holdings Inc (NYSE:SLCA) has faced falling interest from the smart money, logic holds that there exists a select few money managers that elected to cut their positions entirely in the second quarter. Interestingly, Steve Cohen’s Point72 Asset Management sold off the largest stake of all the hedgies monitored by Insider Monkey, worth an estimated $5.1 million in stock, and Scott Bessent’s Key Square Capital Management was right behind this move, as the fund dumped about $4.9 million worth. These transactions are interesting, as total hedge fund interest dropped by 2 funds in the second quarter.

As you can see these stocks had an average of 17 hedge funds with bullish positions and the average amount invested in these stocks was $176 million. That figure was $292 million in SLCA’s case. Five9 Inc (NASDAQ:FIVN) is the most popular stock in this table. On the other hand Puxin Limited (NYSE:NEW) is the least popular one with only 8 bullish hedge fund positions. U.S. Silica Holdings Inc (NYSE:SLCA) is not the least popular stock in this group but hedge fund interest is still below average. Combined with sharply declining hedge fund sentiment over the last 1.5 year, this is a slightly negative signal and we’d rather spend our time researching stocks that hedge funds are piling on. In this regard FIVN or one of the 25 most popular stocks among hedge funds might be a better candidate to consider a long position.