The worries about the election and the ongoing uncertainty about the path of interest-rate increases have been keeping investors on the sidelines. Of course, most hedge funds and other asset managers have been underperforming main stock market indices since the middle of 2015. Interestingly though, smaller-cap stocks registered their best performance relative to the large-capitalization stocks since the end of the June quarter, suggesting that this may be the best time to take a cue from their stock picks. In fact, the Russell 2000 Index gained more than 15% since the beginning of the third quarter, while the Standard and Poor’s 500 benchmark returned less than 6%. This article will lay out and discuss the hedge fund and institutional investor sentiment towards Suffolk Bancorp (NYSE:SCNB).

Is Suffolk Bancorp (NYSE:SCNB) an outstanding investment right now? Money managers don’t think so, as they are thoroughly reducing their bets on the stock. The number of long hedge fund bets that are revealed through 13F filings shrank by 4 in recent months. At the end of this article we will also compare SCNB to other stocks including Lindblad Expeditions Holdings Inc (NASDAQ:LIND), DXP Enterprises Inc (NASDAQ:DXPE), and AAC Holdings Inc (NYSE:AAC) to get a better sense of its popularity.

What does the smart money think about Suffolk Bancorp (NYSE:SCNB)?

At Q3’s end, a total of 7 of the hedge funds tracked by Insider Monkey were bullish on this stock, a 36% drop from the second quarter of 2016, after hedge fund ownership peaked at 11 at the end of June. With hedgies’ sentiment swirling, there exists a select group of notable hedge fund managers who were increasing their stakes substantially (or already accumulated large positions). 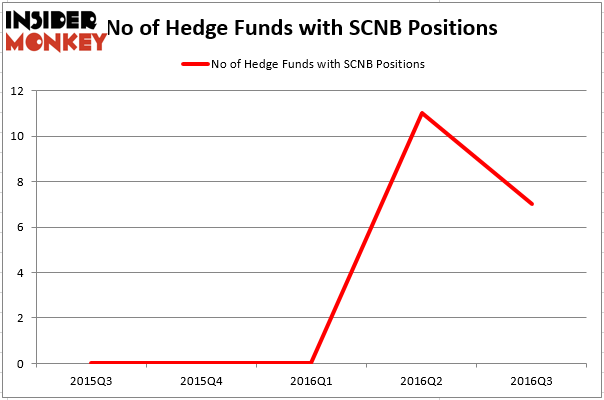 According to Insider Monkey’s hedge fund database, Clint Carlson’s Carlson Capital has the most valuable position in Suffolk Bancorp (NYSE:SCNB), worth close to $15.5 million. Coming in second is Magnetar Capital, led by Alec Litowitz and Ross Laser, holding an $11.4 million position. Some other peers that hold long positions encompass Renaissance Technologies, one of the biggest hedge funds in the world, Paul Tudor Jones’ Tudor Investment Corp, and Matthew Lindenbaum’s Basswood Capital. We should note that none of these hedge funds are among our list of the 100 best performing hedge funds, which is based on the performance of their 13F long positions in non-micro-cap stocks.

How Rapid7 Inc (RPD) Stacks Up Against Its Peers
Monthly Newsletter Strategy
Download a free copy of our newsletter and see the details inside!
Hedge Fund Resource Center
Related News
Why These Five Stocks Are Gaining Ground on Monday? 11 Best Science YouTube Channels To Watch 10 Most Famous Cubist Paintings 5 Countries That Have the Most Drones
Billionaire Hedge Funds