How Slower Growth, Falling Oil Will Boost This Airline

After posting disappointing results in late 2012 and early 2013, Hawaiian Holdings, Inc. (NASDAQ:HA) has bounced back in a big way. The company returned to earnings growth last quarter, sending the stock flying to a new 52-week high. 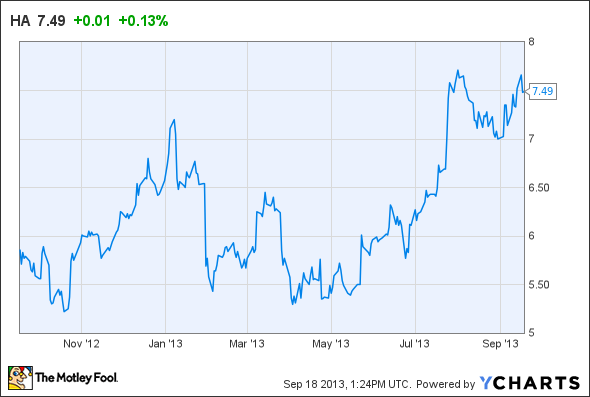 Luckily for shareholders, there may be even better things to come. A more benign capacity environment in the West Coast-Hawaii travel market is starting to boost Hawaiian Holdings, Inc. (NASDAQ:HA)’s domestic fares. Meanwhile, with the prospect of military action in Syria dimming, oil prices are receding. The resulting combination of higher fares and lower costs positions Hawaiian Holdings, Inc. (NASDAQ:HA) to deliver rapid earnings growth this fall and beyond.

Hawaiian Holdings, Inc. (NASDAQ:HA) executives have been looking forward to the fourth quarter for a long time. That’s when the airlines flying between the U.S. West Coast and Hawaii are finally set to undo a series of damaging capacity increases from last year.

United Continental Holdings Inc (NYSE:UAL) responded by trimming capacity between its western hubs and Hawaii by 6% for the second half of 2013. Alaska Air Group, Inc. (NYSE:ALK) is making similarly deep cuts. Alaska Air Group, Inc. (NYSE:ALK) has cut capacity by more than 35% between the Bay Area and Hawaii for its fall schedule. Hawaiian Holdings, Inc. (NASDAQ:HA) is also cutting U.S. capacity for the fall, by redeploying some capacity from its New York, San Jose, and Las Vegas routes to Australia and New Zealand .

As a result of these schedule changes, industry capacity probably declined by about 1% in the current quarter. Hawaiian has projected that this capacity moderation will lead to a year-over-year unit revenue increase for the first time in more than a year .

In Q4, industry capacity is expected to drop by 5%. This should lead to even stronger unit revenue growth for Hawaiian, boosting profitability. Alaska Air Group, Inc. (NYSE:ALK) and United Continental Holdings Inc (NYSE:UAL) will also benefit somewhat from these adjustments, but their flying is much less concentrated in the Hawaii market.

The airline industry may also benefit from cheaper jet fuel costs this fall. U.S. oil production has been growing rapidly since 2011 (up approximately 50% in that time period). However, international crises surrounding the Middle East and North Africa have disrupted production, while also adding a significant risk premium to oil prices. Therefore, the U.S. production boom has not created much price relief yet.