How PNC Financial Services (PNC) Is Dividing and Conquering Banking

PNC Financial Services (NYSE:PNC), owner of PNC Bank, has been one of the fastest-growing banks of the last 15 years. But as the sixth-largest U.S. bank by assets today, and with management spending conference calls discussing too-high acquisition prices, does PNC have the strategy to continue this growth trajectory?

Building the core banking business
PNC’s growth in the mid-Atlantic is a perfect case study in PNC Financial Services (NYSE:PNC)’s acquisition strategy. In 2003, PNC entered the region by purchasing United National Bancorp. This brought the bank into New Jersey and eastern Pennsylvania. This was followed in 2005 by the purchase of Riggs National Bank, bringing PNC into Washington D.C., Maryland, and Northern Virginia.

With a foothold established, the company began a series of acquisitions that made PNC Financial Services (NYSE:PNC) a major player throughout the region. In 2007 alone, PNC bought Sterling Financial Corp, Mercantile Bancshares, ARCS Commercial Mortgage, and Yardville National Bancorp.

Mercantile Bancshares added 240 offices throughout the mid-Atlantic, particularly in the D.C. Metro area. Yardville National was a regional player, with $3 billion in assets and $2 billion in deposits that strengthened PNC Financial Services (NYSE:PNC)’s presence in New Jersey and eastern Pennsylvania. At the time of the acquisition, ARCS Commercial Mortgage was the largest independent multifamily lender in the U.S.

“Be fearful when others are greedy and greedy when others are fearful” — Warren Buffet
With the mid-Atlantic under wraps, PNC Financial Services (NYSE:PNC) then opportunistically focused south and west.

In 2008, PNC acquired National City Bank in a $5.2 billion all-stock deal, immediately giving the bank a strong foothold in the Midwest, including Ohio and Michigan. The deal was struck at a near 20% discount to National City’s market value at the time, and it included a plan to cut 4,000 jobs as part of a $1.2 billion cost savings plan.

In 2011, the bank first acquired 19 branches in the Tampa area from BankAtlantic Bancorp. This was quickly followed with the headline-grabbing purchase of Royal Bank of Canada (USA) (NYSE:RY)‘s U.S. operations. For $3.45 billion, PNC Financial Services (NYSE:PNC) added 426 branches and 900,000 customers in six southeastern states.

Both the National City and RBC deals came during one of the most uncertain times in the last 75 years for banks. Both were large acquisitions that provided tremendous long-term upside for PNC, expanding the brand out of the mid-Atlantic and into the Midwest and then the South.

In 2005, PNC bought Harris Williams, adding merger and acquisitions advising and other investment banking services to the division. This was followed in 2007 by the purchase of Sterling Financial, a financial services company with $3.3 billion in assets and 67 branches. These two acquisitions gave PNC Financial Services (NYSE:PNC) a robust investment platform for both businesses and individuals. The pattern, again, is to buy into a market, then buy again to strengthen its market share.

What does the future hold?
There is no reason to believe PNC will not continue the same pattern, opportunistically expanding its footprint, then blanketing the region with successive acquisitions.

PNC has real estate and corporate operations already established in the west and southwest. The move north into New England is also appealing, as the PNC brand would be continuous along the entire east coast.

The proof is in the pudding, as they say, and PNC’s acquisition strategy has proven to be highly effective. Since 2003, the bank nearly doubled total assets and tripled basic earnings per share. The bank has proven itself at growing without sacrificing profitability. 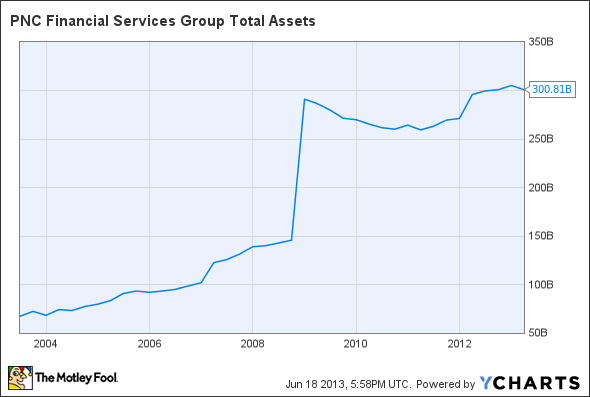 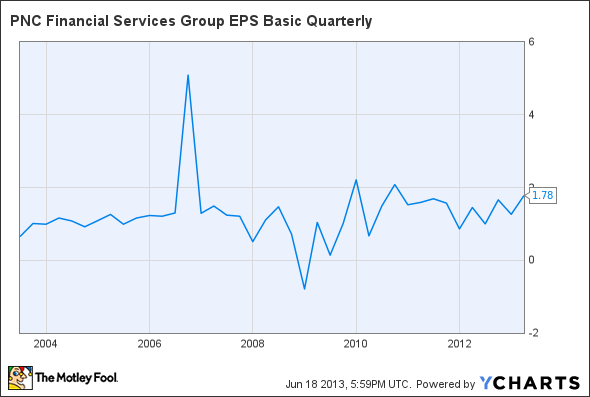