Oracle Corporation (NASDAQ:ORCL) has introduced product life cycle management (PLM) and product management for process into the market. They will both assist companies of different types to make innovations profitable and enhance usability and processes. I will explain how product management spending will favor the growth of Oracle’s new products. Specifically, I will look at the effect of the PLM market and the demand for the products on Oracle’s new releases. These trends will enable Oracle to sell more of these products and improve its price multiples.

Why will Oracle achieve sales growth? It’s all about the significant rebound in the PLM market in the past few years. The market totaled more than $10.5 billion in 2011, marking the first time it grew beyond $10.0 billion. Its suppliers witnessed recoveries in industries like automotive and A&D, as well as great improvement in markets like consumer goods, energy, AEC, and shipbuilding. The industry’s market revenues for the first two quarters of 2012 showed impressive growth.

In the accompanying chart released in October 2012, Gartner, the respected analysts, predicted continuing growth over the next 5-year forecast period for database management systems. The stats about big data software bolsters the idea that Oracle’s life cycle management and product management for process will be successful. 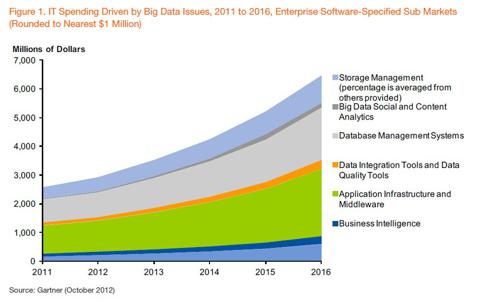 Due to the strong sales growth of its product lifecycle management and other software, Oracle announced revenues of $9.1 billion in its second quarter 2013, an increase of 3%. GAAP operating margin of 38%, and non-GAAP operating margin was 47%. GAAP net income grew 18% to $2.6 billion, while non-GAAP net income also went up 12% to $3.1 billion. GAAP earnings per share was $0.53, up 24% compared to last year, while non-GAAP earnings per share was up 18% to $0.64. New software licenses and cloud software subscriptions revenues were up 17% to $2.4 billion. Software license updates and product support revenues were up 7% to $4.3 billion.

“Strong organic growth in our software business coupled with a focus on the highly profitable engineered systems segment of our hardware business enabled a Q2 non-GAAP operating margin of 47%,” said Oracle President and CFO Safra Catz.

“On a non-GAAP basis, new software licenses and cloud software subscriptions sales grew 11% in constant currency and operating margin increased to 44% in Q1,” said Safra Catz. “Q1 operating cash flow increased to a record high of $5.7 billion. We’re off to a good start in the new year.”