How Much Faster Could We Reach Dow Records on a Kraft Foods Group Inc (KRFT) Diet?

The Dow Jones Industrial Average finally made it back to the summit. After sniffing around just below record levels all February long, the blue-chip index broke through to brand-new all-time highs today. The 14,164 high-water mark that was set in 2007 has been washed away.

The index made a significant change in recent months when Kraft Foods Group Inc (NASDAQ:KRFT) spun off its snack food operations as a stand-alone company named Mondelez International Inc (NASDAQ:MDLZ) . Dow component Kraft Foods Group Inc (NASDAQ:KRFT) no longer had the heft to stay on the index, and squeezing Mondelez into an unprecedented 31st seat was an unthinkable break with tradition. So Kraft had to go, replaced by health insurance giant UnitedHealth Group Inc. (NYSE:UNH) .

What if the Dow board had decided to stick with the new, slimmer Kraft instead of bringing in fresh blood to replace it? UnitedHealth and Kraft Foods Group Inc (NASDAQ:KRFT) have moved in completely opposite directions lately, with UnitedHealth falling while Kraft has outgained the Dow: 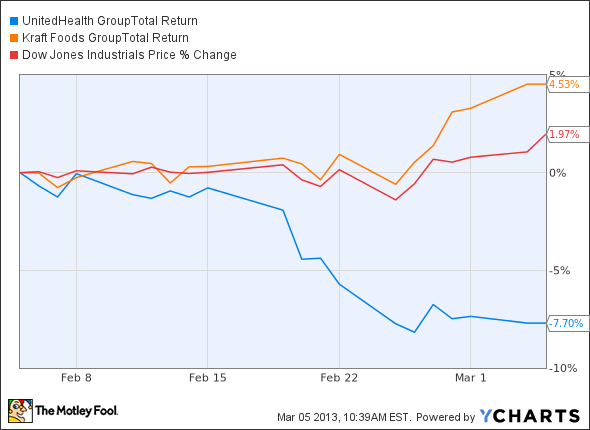 Staying with Kraft would surely have accelerated the Dow’s rise to record heights. Champagne corks could have popped sooner. But how much sooner?

Not a whole lot, as it turns out.

Kraft Foods Group Inc (NASDAQ:KRFT) shares have gained 8% on a dividend-adjusted basis since being dumped from the Dow. Meanwhile, UnitedHealth shares lost 4.3%. That means UnitedHealth slowed the Dow’s ascent down by 19 points, while Kraft would have added 44 points. With share prices in the neighborhood of $50, either stock represents about 3% of the Dow’s daily movements.

So it’s safe to say that the Dow would have topped record levels yesterday, rather than closing less than 40 points out of reach. Depending on the dynamics of mass psychology in the face of a long-awaited record, the Dow might have scaled the summit at various times last week as well.

Yes, Kraft would have taken us to all-time highs sooner, but not by much. On the flip side, UnitedHealth shouldn’t feel too guilty about slowing down the carousel of progress.

The article How Much Faster Could We Reach Dow Records on a Kraft Diet? originally appeared on Fool.com.

Fool contributor Anders Bylund holds no position in any company mentioned. Check out Anders’ bio and holdings or follow him on Twitter and Google+. Motley Fool newsletter services have recommended buying shares of UnitedHealth Group.

Bank of America Corp (BAC), Johnson & Johnson (JNJ): The Most and Least...