After a frantic weekend in September of 2008 during which investment banks scrambled for suitors in a desperate attempt to avoid the fate of Lehman Brothers, Bank of America Corp (NYSE:BAC), the nation’s largest consumer bank at the time, agreed to buy Merrill Lynch, its counterpart in the retail brokerage and wealth management realms.

The move was heralded as a coup for the bank’s 61-year-old chairman and chief executive officer. “Ken Lewis with this transaction just got that much more powerful in the global financial structure,” Meredith Whitney told The New York Times five years ago. “If Mr. Lewis has long clamored for the respect of the banking industry’s more established leaders,” the paper went on to note, “he appears to have emerged from the deal as one of Wall Street’s white knights.”

A necessary and transformative deal
For Bank of America Corp (NYSE:BAC), the acquisition was transformative in every sense of the word. In one fell swoop, it morphed from a stodgy, backwater lender that catered to the masses into a world-class universal bank with more than $2 trillion in assets on its balance sheet. It already had the nation’s largest branch network and led the industry in credit card issuance, mortgage underwriting, and auto loans. Now it also had an industry-leading investment bank and the world’s largest wealth-management operations. 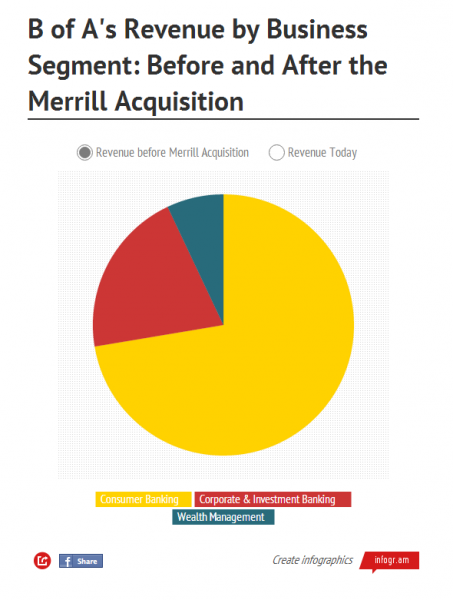 B of As Revenue by Business Segment: Before and After the Merrill Acquisition | Infographics

But as time has passed, it’s also become increasingly clear that the narrative casting Bank of America Corp (NYSE:BAC) as the savior of Merrill Lynch, its white knight, is much more nuanced.

In the days and weeks that followed, there was little doubt that it gave Merrill a second lease on life. Had the North Carolina-based lender not stepped in, it’s almost certain the listing investment bank would have failed. It was egregiously undercapitalized at the time and had tens of billions of dollars’ worth of exposure to toxic collateralized debt obligations backed by subprime mortgages.

And had Bank of America Corp (NYSE:BAC) not stepped in when it did, Merrill’s shareholders very well could have been left with nothing. The deal inked over that fateful weekend in September included a $50 billion price tag, in which Merrill’s stakeholders got 0.8595 shares of Bank of America Corp (NYSE:BAC) common stock for each Merrill Lynch common share. “In retrospect, [Lewis] should have waited until Monday,” CNNMoney’s Shawn Tully said, “when he stood an excellent chance of bagging Merrill for a fraction of that price.”