Before we spend countless hours researching a company, we like to analyze what insiders, hedge funds and billionaire investors think of the stock first. This is a necessary first step in our investment process because our research has shown that the elite investors’ consensus returns have been exceptional. In the following paragraphs, we find out what the billionaire investors and hedge funds think of Emmis Communications Corporation (NASDAQ:EMMS).

Emmis Communications Corporation (NASDAQ:EMMS) was in 3 hedge funds’ portfolios at the end of March. EMMS has experienced an increase in hedge fund interest lately. There were 2 hedge funds in our database with EMMS holdings at the end of the previous quarter. Our calculations also showed that EMMS isn’t among the 30 most popular stocks among hedge funds (click for Q1 rankings and see the video for a quick look at the top 5 stocks).

According to most market participants, hedge funds are assumed to be worthless, old investment vehicles of years past. While there are over 8000 funds in operation at present, Our researchers hone in on the top tier of this group, around 850 funds. These money managers preside over the majority of all hedge funds’ total capital, and by keeping an eye on their highest performing stock picks, Insider Monkey has deciphered a number of investment strategies that have historically outperformed the broader indices. Insider Monkey’s flagship short hedge fund strategy beat the S&P 500 short ETFs by around 20 percentage points annually since its inception in March 2017. Our portfolio of short stocks lost 36% since February 2017 (through May 18th) even though the market was up 30% during the same period. We just shared a list of 8 short targets in our latest quarterly update .

At Insider Monkey we leave no stone unturned when looking for the next great investment idea. For example, legendary investor Bill Miller told investors to sell 7 extremely popular recession stocks last month. So, we went through his list and recommended another stock with 100% upside potential instead. We interview hedge fund managers and ask them about their best ideas. You can watch our latest hedge fund manager interview here and find out the name of the large-cap healthcare stock that Sio Capital’s Michael Castor expects to double. We read hedge fund investor letters and listen to stock pitches at hedge fund conferences. Our best call in 2020 was shorting the market when S&P 500 was trading at 3150 after realizing the coronavirus pandemic’s significance before most investors. With all of this in mind we’re going to analyze the fresh hedge fund action encompassing Emmis Communications Corporation (NASDAQ:EMMS).

Heading into the second quarter of 2020, a total of 3 of the hedge funds tracked by Insider Monkey held long positions in this stock, a change of 50% from one quarter earlier. The graph below displays the number of hedge funds with bullish position in EMMS over the last 18 quarters. With hedgies’ sentiment swirling, there exists a few noteworthy hedge fund managers who were increasing their stakes significantly (or already accumulated large positions). 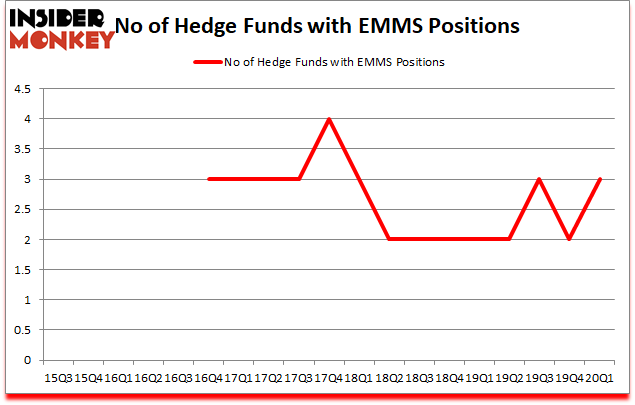 As you can see these stocks had an average of 2.5 hedge funds with bullish positions and the average amount invested in these stocks was $1 million. That figure was $2 million in EMMS’s case. Garrison Capital Inc (NASDAQ:GARS) is the most popular stock in this table. On the other hand FlexShopper, Inc. (NASDAQ:FPAY) is the least popular one with only 1 bullish hedge fund positions. Emmis Communications Corporation (NASDAQ:EMMS) is not the most popular stock in this group but hedge fund interest is still above average. This is a slightly positive signal but we’d rather spend our time researching stocks that hedge funds are piling on. Our calculations showed that top 10 most popular stocks among hedge funds returned 41.4% in 2019 and outperformed the S&P 500 ETF (SPY) by 10.1 percentage points. These stocks gained 7.9% in 2020 through May 22nd but beat the market by 15.6 percentage points. Unfortunately EMMS wasn’t nearly as popular as these 10 stocks and hedge funds that were betting on EMMS were disappointed as the stock returned -27.5% during the same time period and underperformed the market. If you are interested in investing in large cap stocks with huge upside potential, you should check out the top 10 most popular stocks among hedge funds as many of these stocks already outperformed the market so far this year.