The latest 13F reporting period has come and gone, and Insider Monkey is again at the forefront when it comes to making use of this gold mine of data. Insider Monkey finished processing 821 13F filings submitted by hedge funds and prominent investors. These filings show these funds’ portfolio positions as of March 31st, 2020. In this article we are going to take a look at smart money sentiment towards American Express Company (NYSE:AXP).

Is American Express Company (NYSE:AXP) a buy here? Money managers are turning less bullish. The number of bullish hedge fund positions went down by 1 in recent months. Our calculations also showed that AXP isn’t among the 30 most popular stocks among hedge funds (click for Q1 rankings and see the video for a quick look at the top 5 stocks). AXP was in 57 hedge funds’ portfolios at the end of March. There were 58 hedge funds in our database with AXP holdings at the end of the previous quarter.

At Insider Monkey we leave no stone unturned when looking for the next great investment idea. For example, legendary investor Bill Miller told investors to sell 7 extremely popular recession stocks last month. So, we went through his list and recommended another stock with 100% upside potential instead. We interview hedge fund managers and ask them about their best ideas. You can watch our latest hedge fund manager interview here and find out the name of the large-cap healthcare stock that Sio Capital’s Michael Castor expects to double. We read hedge fund investor letters and listen to stock pitches at hedge fund conferences. Our best call in 2020 was shorting the market when S&P 500 was trading at 3150 after realizing the coronavirus pandemic’s significance before most investors. Keeping this in mind let’s take a peek at the key hedge fund action regarding American Express Company (NYSE:AXP).

How have hedgies been trading American Express Company (NYSE:AXP)?

Heading into the second quarter of 2020, a total of 57 of the hedge funds tracked by Insider Monkey held long positions in this stock, a change of -2% from the previous quarter. The graph below displays the number of hedge funds with bullish position in AXP over the last 18 quarters. So, let’s find out which hedge funds were among the top holders of the stock and which hedge funds were making big moves. 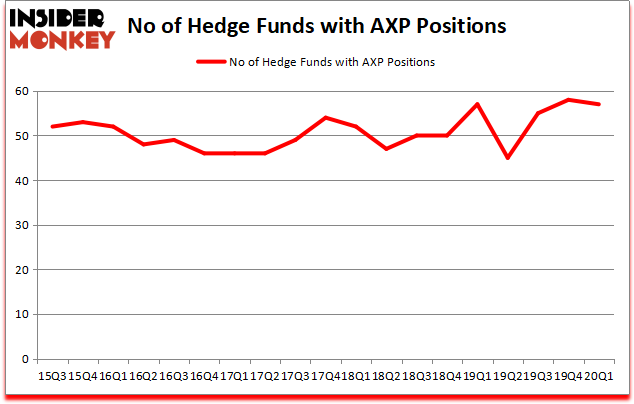 The largest stake in American Express Company (NYSE:AXP) was held by Berkshire Hathaway, which reported holding $12979.4 million worth of stock at the end of September. It was followed by Fisher Asset Management with a $1201.9 million position. Other investors bullish on the company included Viking Global, Egerton Capital Limited, and Ako Capital. In terms of the portfolio weights assigned to each position Aquamarine Capital Management allocated the biggest weight to American Express Company (NYSE:AXP), around 12.26% of its 13F portfolio. Hi-Line Capital Management is also relatively very bullish on the stock, earmarking 8.58 percent of its 13F equity portfolio to AXP.

Because American Express Company (NYSE:AXP) has faced a decline in interest from the entirety of the hedge funds we track, we can see that there lies a certain “tier” of money managers that elected to cut their entire stakes by the end of the third quarter. Interestingly, Patrick Degorce’s Theleme Partners cut the biggest position of the “upper crust” of funds tracked by Insider Monkey, comprising about $145.7 million in stock. Ravi Chopra’s fund, Azora Capital, also cut its stock, about $46.6 million worth. These transactions are interesting, as total hedge fund interest fell by 1 funds by the end of the third quarter.

As you can see these stocks had an average of 31.5 hedge funds with bullish positions and the average amount invested in these stocks was $1015 million. That figure was $15414 million in AXP’s case. Cigna Corporation (NYSE:CI) is the most popular stock in this table. On the other hand Coca-Cola FEMSA, S.A.B. de C.V. (NYSE:KOF) is the least popular one with only 7 bullish hedge fund positions. American Express Company (NYSE:AXP) is not the most popular stock in this group but hedge fund interest is still above average. This is a slightly positive signal but we’d rather spend our time researching stocks that hedge funds are piling on. Our calculations showed that top 10 most popular stocks among hedge funds returned 41.4% in 2019 and outperformed the S&P 500 ETF (SPY) by 10.1 percentage points. These stocks gained 7.9% in 2020 through May 22nd but beat the market by 15.6 percentage points. Unfortunately AXP wasn’t nearly as popular as these 10 stocks and hedge funds that were betting on AXP were disappointed as the stock returned 4.9% during the same time period and underperformed the market. If you are interested in investing in large cap stocks with huge upside potential, you should check out the top 10 most popular stocks among hedge funds as many of these stocks already outperformed the market so far this year.