How Graham Corporation (GHM) Stacks Up Against Its Peers

Graham Corporation (NYSE:GHM) investors should pay attention to an increase in activity from the world’s largest hedge funds lately. There were 7 hedge funds in our database with GHM holdings at the end of the second quarter, which rose to 8 by the end of the third quarter. The level and the change in hedge fund popularity aren’t the only variables you need to analyze to decipher hedge funds’ perspectives. A stock may witness a boost in popularity but it may still be less popular than similarly priced stocks. That’s why at the end of this article we will examine companies such as Veritex Holdings Inc (NASDAQ:VBTX), Alliance One International, Inc. (NYSE:AOI), and Southern Missouri Bancorp, Inc. (NASDAQ:SMBC) to gather more data points.

What have hedge funds been doing with Graham Corporation (NYSE:GHM)?

At the end of the third quarter, a total of 8 of the hedge funds tracked by Insider Monkey were long this stock, a gain of 14% from the previous quarter. By comparison, 8 hedge funds held shares or bullish call options in GHM heading into this year, so sentiment is flat for the year. With hedge funds’ positions undergoing their usual ebb and flow, there exists a select group of notable hedge fund managers who were upping their stakes significantly (or already accumulated large positions). 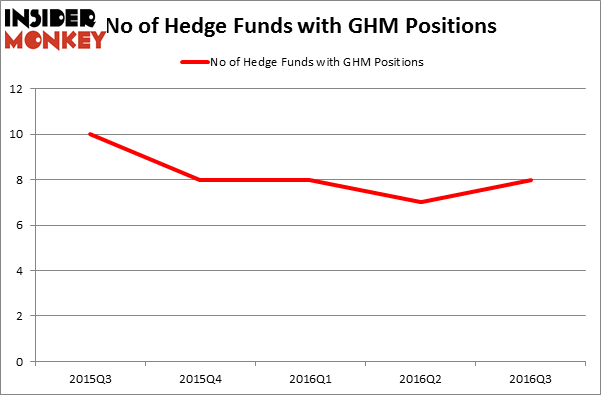 According to Insider Monkey’s hedge fund database, Bryant Regan’s Lafitte Capital Management holds the number one position in Graham Corporation (NYSE:GHM). Lafitte Capital Management has a $9.6 million position in the stock, comprising 5.4% of its 13F portfolio. The second most bullish fund manager is Chuck Royce’s Royce & Associates, which holds a $4.7 million position. Other hedge funds and institutional investors with similar optimism comprise Renaissance Technologies, one of the largest hedge funds in the world, David E. Shaw’s D E Shaw, and Charles Frumberg’s Emancipation Capital. We should note that none of these hedge funds are among our list of the 100 best performing hedge funds, which is based on the performance of their 13F long positions in non-micro-cap stocks.