How Gerdau SA (ADR) (GGB) Stacks Up Against Its Peers?

Gerdau SA (ADR) (NYSE:GGB) shareholders have witnessed a decrease in enthusiasm from smart money lately. GGB was in 11 hedge funds’ portfolios at the end of the third quarter of 2016. There were 13 hedge funds in our database with GGB holdings at the end of the previous quarter. The level and the change in hedge fund popularity aren’t the only variables you need to analyze to decipher hedge funds’ perspectives. A stock may witness a boost in popularity but it may still be less popular than similarly priced stocks. That’s why at the end of this article we will examine companies such as Blue Buffalo Pet Products Inc (NASDAQ:BUFF), Enel Chile SA – ADR(NYSE:ENIC), and HEICO Corporation (NYSE:HEI) to gather more data points.

What have hedge funds been doing with Gerdau SA (ADR) (NYSE:GGB)? 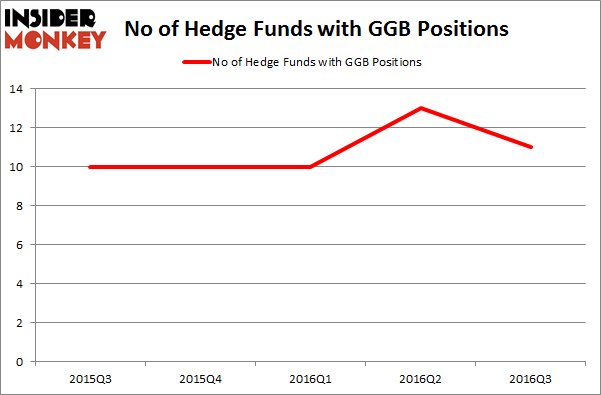 Of the funds tracked by Insider Monkey, Renaissance Technologies, one of the largest hedge funds in the world,, holds the number one position in Gerdau SA (ADR) (NYSE:GGB). Renaissance Technologies has a $59.8 million position in the stock. Coming in second is Contrarian Capital, led by Jon Bauer, holding a $29.2 million position; 13.9% of its 13F portfolio is allocated to the company. Some other hedge funds and institutional investors with similar optimism encompass Howard Marks’ Oaktree Capital Management, Israel Englander’s Millennium Management and Glenn Russell Dubin’s Highbridge Capital Management. We should note that none of these hedge funds are among our list of the 100 best performing hedge funds which is based on the performance of their 13F long positions in non-microcap stocks.

Is RLI Corp. (RLI) A Good Stock To Buy?
Monthly Newsletter Strategy
Download a free copy of our newsletter and see the details inside!
Hedge Fund Resource Center
Related News
Contrarian Capital’s Stock Picks Like American Airlines Group Inc (AAL) Have a Positive Impact on Its Returns Deutsche Bank Fine Hits Credit Suisse and RBS Hard, Plus 3 Other Stocks That Are Getting Beaten Down Today Distressed Securities-Focused Investor Bought These Five Stocks; Should You Follow? What Is Going On With These 5 Falling Stocks? What is Causing These 5 Stocks to Move Sharply on Friday? Why These Five Stocks Are Gaining Ground Today How Do Hedge Funds Feel About Gerdau SA (GGB)? 11 Best Science YouTube Channels To Watch 10 Most Famous Cubist Paintings 5 Countries That Have the Most Drones
Billionaire Hedge Funds