How Enterprises Can Expand Market Share by Enabling Digital Adoption

A 2018 study commissioned by Amazon shows that unlocking the economic potential of rural areas across the UK through increased digital adoption could add £12 to £26.4bn annually in Gross Value Added (GVA). In the U.S. the economic growth that could potentially be unlocked by increasing digital adoption is valued at $84.5 billion per annum.

The enterprise market is highly competitive; big names are always fighting for market share, and startups are constantly nibbling at the fringes with innovative and disruptive solutions. However, increasing digital adoption in new frontiers could expand the addressable market for businesses. This piece explores why enterprises should and can take the lead in powering digital adoption in underserved and unserved markets.

What is digital adoption?

Digital adoption is a subset of digital transformation in which businesses are empowered to use digital tools and to master advanced features to drive operational excellence that leads to a significant and sustainable impact in their bottom lines. For enterprises, digital adoption refers to a state of where new software or technology is integrated into core business processes, where workflows are digitalized, where a digital mindset is encouraged, and where organizational changes are implemented to support the transformation.

All enterprises regardless of size should be proactive about digital adoption in their operations. Microsoft Corporation (NASDAQ:MSFT) exemplifies this innovative mindset in its Microsoft IT project that ran over the last several years and which was detailed in its IT showcase report. The company revealed that it had to be intentional about driving the digital adoption to migrate more than 2100 internal applications from its on-premises servers to the cloud.

Correlation shouldn’t be mistaken for correlation but the chart below shows how Microsoft’s business and the share price have grown in the last five years with significant boosts on share price, revenue, and net income. Interestingly, Microsoft noted that the biggest challenge to driving digital adoption wasn’t the technology but powering the needed cultural change. 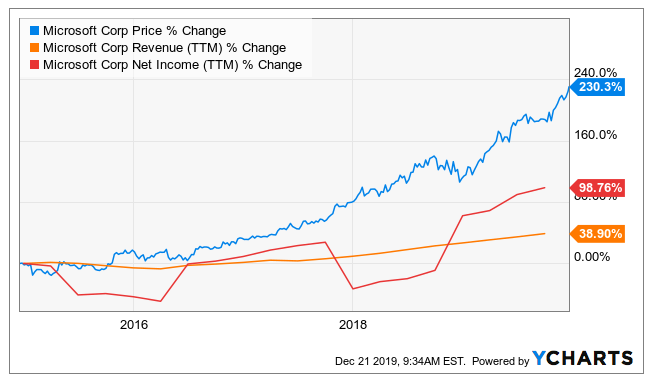 There are many buzzwords in business and technology and oftentimes, those buzzwords are nothing more than empty signaling without any measurable impact on the top or bottom line of businesses. However, digital adoption is not one of such buzzwords; the results of many academic and industry reports are corroborating the potential impact of digital adoption in business success.

There’s significant economic potential lying dormant in rural areas and technologically disadvantaged communities. The 2018 Rural England report posits that over 80% of rural businesses that exported in the last year made use of online sales. Interestingly, the top export destinations were the EU (84% of exports) and the USA (45%), markets with an existing pool of digital-savvy consumers.

As an example, the researchers estimate that if Scotland were to become a world leader in digitization it could increase its Gross Domestic Product (GDP) by £13 billion by the year 2030. 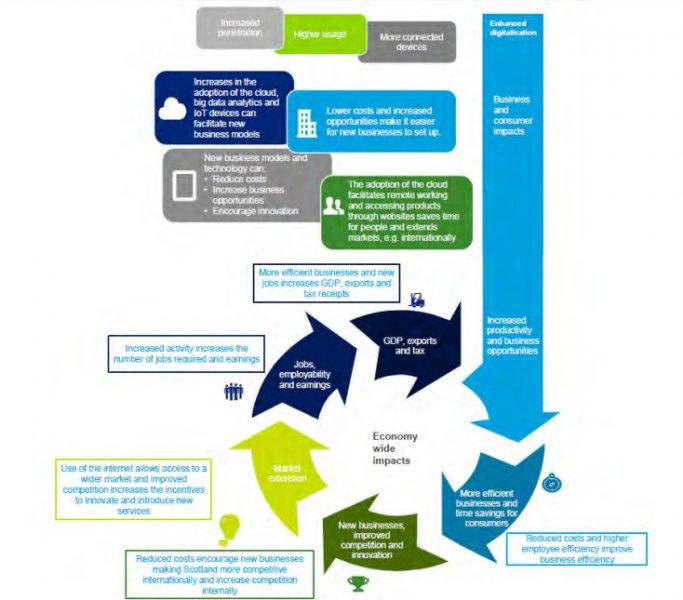 More so, the research done by Lorenzani and Varga (EU Commission 2014) for the EU Commission reported that improving digital skills in fledging economies could lead to an estimated 1% short-term productivity gain. In the longer-term, such productivity gains could account for more than a 3% increase in GDP. In financial terms, the increased productivity could be worth Euro 415 billion to the EU economy by 2025.

Probably the surest way to hold a controlling market share in an industry is to create the market. Think about companies that have the controlling market share their industry, you’ll observe that such companies are usually the first ones to implement a blue oceans strategy into uncharted waters. Tesla, Inc. (NASDAQ:TSLA) is the leading electric vehicle company in Europe and North America because it dared to bring EVs to the mass market. Amazon.com Inc. (NASDAQ:AMZN) is a leader in the global e-commerce market because it channelled the dotcom craze into retail at a time when brick and mortar stores were still economically dominant.

Alphabet Inc’s Google (NASDAQ:GOOG) and Facebook, Inc. (NASDAQ:FB) are perhaps the best examples of companies leading the charge for digital adoption while simultaneously using the digital adoption that they facilitate as economic moats around their businesses.

Google controls more than 90% market share in web, mobile, and in-app searches while the other players in the market struggle for the remaining market share. Google’s dominance in the global search market didn’t come from a first-mover advantage – there were other search engines before Google. Google’s lead comes from its powering of the Android OS, which in turn became the leading mobile OS, and which automatically made Google Search the default search as mobile penetration continued to extend into new markets.

Facebook is also powering digital adoption through its support for businesses across Facebook, Instagram, Messenger, and WhatsApp. Its Facebook Blueprint program provides small business owners with valuable education on how to leverage Facebook’s products and services to give their businesses a digital presence,

Also, even though doesn’t yet have an OS, but its Facebook Express Wi-Fi project is fostering digital adoption by enabling internet connectivity in emerging markets. The fast, cheap, and reliable Wi-Fi available through ExpressWifi, in turn, makes Facebook the de-facto homepage of the Internet.

How can enterprises power digital adoption?

The Enterprise Software Market is set to reach $78.41 Bn, globally, by 2026 at 10.2% CAGR according to Allied Market Research. Driving digital adoption in underserved markets could help you carve out a profitable niche with lesser competition. It may seem counterintuitive to target a small market when you are looking to increase your market share. But one thing many businesses don’t know is this – the money is in the niche. When small markets are combined, they could eventually add up into significant market share.