How Dividends Changed the Game for Microsoft Corporation (MSFT) Stock

Microsoft Corporation (NASDAQ:MSFT) CEO Steve Ballmer just announced his own retirement after 13 years at the helm in Redmond. Under Ballmer’s reign, Microsoft transitioned from the exceptional growth of the 1990s and early 2000s to today’s stable, dividend-paying state. Let’s take a look back at the dividend history that Ballmer started.

Microsoft’s first dividend was issued just more than 10 years ago, starting at a 0.3% yield. The company issued a large special dividend in 2004, and that payment of $3 per share throws off long-term dividend charts with a massive spike. Microsoft Corporation (NASDAQ:MSFT) also took a breather from increasing its payouts in 2009, given the sudden pressure on cash flows from the global financial crisis. Other than these unusual adjustments, this has been a veritable dividend aristocrat since that modest first payout: 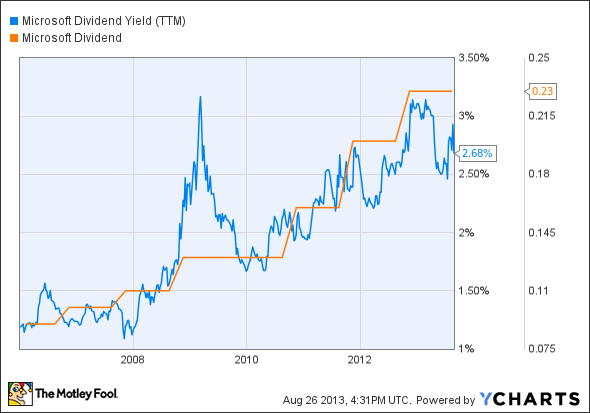 The enormous special dividend was created in order to share Microsoft Corporation (NASDAQ:MSFT)’s excess cash with shareholders. That meant sending out dividend checks far beyond the company’s cash flows that year. Other than that, not even the 2008-2009 crisis put any serious pressure on Microsoft’s ability to cover its dividend expenses with organic cash flows. The cash payout ratio likes to stay below 40% with some margin to spare. 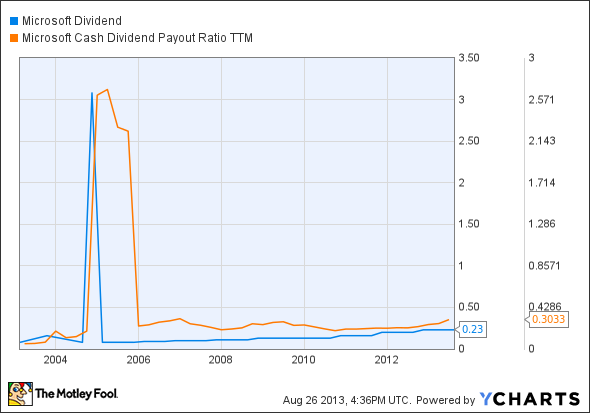 The dividend Ballmer started has indeed been a game changer for Microsoft Corporation (NASDAQ:MSFT) investors. Without reinvested dividends, Microsoft shares have provided a 47% return in the dividend-paying era. Plowing every dividend check right back into more Microsoft shares more than doubled that return to 97%.

However, the stock hasn’t been a world-beater no matter how you slice the dividend checks. The Dow has gained 91% over the same period without reinvested dividends, or 103% if you turned on dividend reinvestments for a Dow tracker such as the SPDR Dow Jones Industrial Average ETF (NYSEMKT:DIA), more commonly known as Diamonds. At best, Microsoft Corporation (NASDAQ:MSFT)’s dividends only helped shareholders keep pace with a simple Dow-tracking fund.

Microsoft shares are trading near multiyear highs following Ballmer’s surprising retirement pledge, but the stock also faces an incredible amount of uncertainty right now. Who will lead Redmond into the next era? Will the new CEO be able to deliver on the mobile-computing promises that Ballmer never grasped? The PC market that created this giant is winding down. Does Microsoft have any new game-changers up its voluminous sleeves to make up for this downtrend?

The article How Dividends Changed the Game for Microsoft Stock originally appeared on Fool.com and is written by Anders Bylund.

Fool contributor Anders Bylund holds no position in any company mentioned. Check out Anders’ bio and holdings or follow him on Twitter and Google+. The Motley Fool owns shares of Microsoft. Motley Fool newsletter services have recommended creating a bull call spread position in Microsoft.