How Comcast and Other Hedge Fund Favorites Performed in Q2 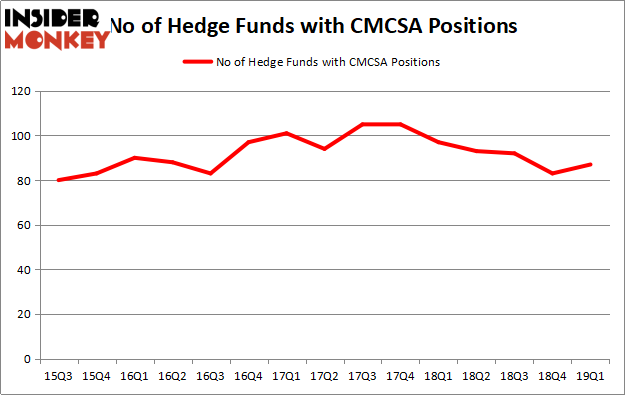 The largest stake in Comcast Corporation (NASDAQ:CMCSA) was held by Eagle Capital Management, which reported holding $1321.2 million worth of stock at the end of March. It was followed by First Pacific Advisors LLC with a $497.2 million position. Other investors bullish on the company included Two Sigma Advisors, Southeastern Asset Management, and AQR Capital Management.

As you can see these stocks had an average of 23.75 hedge funds with bullish positions and the average amount invested in these stocks was $1807 million. That figure was $6280 million in CMCSA’s case. PepsiCo, Inc. (NYSE:PEP) is the most popular stock in this table. On the other hand Toyota Motor Corporation (NYSE:TM) is the least popular one with only 10 bullish hedge fund positions. Compared to these stocks Comcast Corporation (NASDAQ:CMCSA) is more popular among hedge funds. Our calculations showed that top 20 most popular stocks among hedge funds returned 6.4% in Q2 and outperformed the S&P 500 ETF (SPY) by nearly 3 percentage points. Hedge funds were also right about betting on CMCSA as the stock returned 6.3% during the same period and outperformed the market as well. Comcast shares also beat the market so far this year, returning close to 25%. Hedge funds were once again right about piling into this stock instead of other stocks index funds indiscriminately buying.