How Bill Barrett Corporation (BBG) Stacks Up Against Its Peers

Bill Barrett Corporation (NYSE:BBG) shares didn’t see a lot of action during the third quarter. Overall, hedge fund sentiment was unchanged. The stock was in 19 hedge funds’ portfolios at the end of September. The level and the change in hedge fund popularity aren’t the only variables you need to analyze to decipher hedge funds’ perspectives. A stock may witness a boost in popularity but it may still be less popular than similarly priced stocks. That’s why at the end of this article we will examine companies such as Cloud Peak Energy Inc. (NYSE:CLD), PennyMac Mortgage Investment Trust (NASDAQ:PMTS), and Tucows Inc. (USA) (NYSEAMEX:TCX) to gather more data points.

What have hedge funds been doing with Bill Barrett Corporation (NYSE:BBG)? 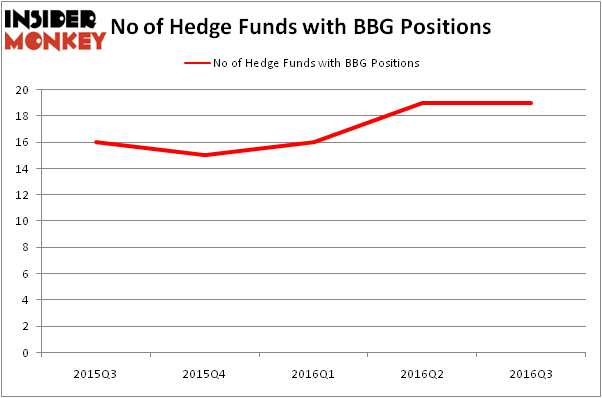 According to Insider Monkey’s hedge fund database, Ross Margolies’s Stelliam Investment Management has the largest position in Bill Barrett Corporation (NYSE:BBG), worth close to $36.1 million, amounting to 1.2% of its total 13F portfolio. On Stelliam Investment Management’s heels is Renaissance Technologies, one of the largest hedge funds in the world, which holds a $11.4 million position. Other professional money managers that are bullish encompass Vince Maddi and Shawn Brennan’s SIR Capital Management, Gregory Fraser, Rudolph Kluiber, and Timothy Krochuk’s GRT Capital Partners and Israel Englander’s Millennium Management. We should note that two of these hedge funds (SIR Capital Management and GRT Capital Partners) are among our list of the 100 best performing hedge funds which is based on the performance of their 13F long positions in non-microcap stocks.

Is RadNet Inc. (RDNT) Going to Burn These Hedge Funds?
Monthly Newsletter Strategy
Download a free copy of our newsletter and see the details inside!
Hedge Fund Resource Center
Related News
4 Stocks and 1 ETF That Had Soaring Short Interest Ahead of the Election Why These 5 NYSE Stocks Are Down Big Time Today Four Stocks Driving Thursday’s Market Gains: How Did They Do It? Why Are These Four Stocks in The Spotlight Today? Dyax, Bill Barrett, MeetMe: What You Need To Know About Today’s Hottest Stocks Shapiro Capital Reports New Positions in Bill Barrett & Starboard Value’s Next Target, Calgon Carbon W&T Offshore, Inc. (WTI): Are Hedge Funds Right About This Stock? 11 Best Science YouTube Channels To Watch 10 Most Famous Cubist Paintings 5 Countries That Have the Most Drones
Billionaire Hedge Funds