After the U.K. Parliament voted against a military strike against Syria yesterday, the momentum for retaliatory action against the Assad regime has slowed. This may have helped prevent another slide in U.S. stocks this morning. The S&P 500 and the narrower, price-weighted Dow Jones Industrial Average are relatively flat this morning, down 0.17% each as of 10:05 a.m. EDT.

Nevertheless, with its credibility on the line, the Obama administration seems determined to see this through. I believe the odds of imminent military action remain high.

The U.S. consumer finance business issues store credit cards — including one on behalf of Walmart — to 55 million Americans and represents roughly $50 billion in loans outstanding.

In the wake of the credit crisis, General Electric Company (NYSE:GE) has sought to reduce the proportion of profit that GE Capital contributes to the overall pie. While that process is ongoing, the proportion remains substantial — 45% in its most recent quarter. CEO Jeff Immelt wants to reduce that number to 30%.

Speaking of Mr. Immelt, he needs to look busy, as he’s under a certain amount of pressure. Why? Just take at the share graphs: General Electric Company (NYSE:GE) has underperformed its conglomerate peers Honeywell International Inc. (NYSE:HON) and United Technologies Corporation (NYSE:UTX) and the S&P 500 year to date, over the past 12 months, and over the trailing five- and 10-year periods! 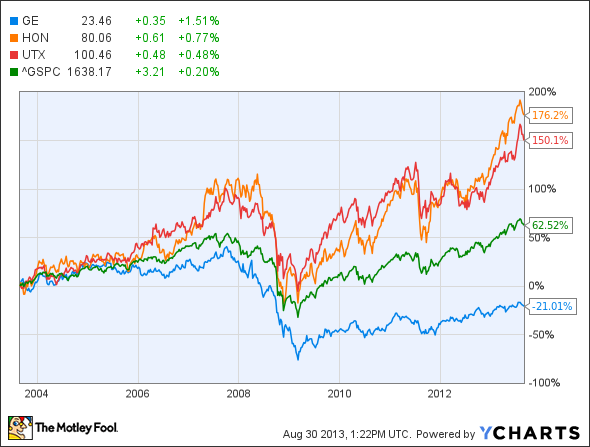 Part of that underperformance is attributable to investors’ unwillingness to award the same multiple to a business that derives a substantial proportion of its earnings from lending activities. As of yesterday’s close, the market was valuing General Electric Company (NYSE:GE)’s shares at 13.4 times the estimate of the next 12 months’ earnings; Honeywell International Inc. (NYSE:HON) and United Technologies Corporation (NYSE:UTX), on the other hand, both sport multiples closer to 16.

Will spinning off the U.S. consumer finance business help bring General Electric Company (NYSE:GE)’s multiple in line with its peers? It’s a step in the right direction, which is important, because in a low-growth environment, multiple-expansion could be a useful source of returns over the next several years.

The article GE Wants Out of Consumer Credit originally appeared on Fool.com and is written by Alex Dumortier, CFA.

Fool contributor Alex Dumortier, CFA has no position in any stocks mentioned; you can follow him on LinkedIn. The Motley Fool owns shares of General Electric Company.