Published on March 29, 2019 at 4:53 am by Nina Zdinjak in Hedge Fund Investor Letters, Hedge Funds, News

In billionaire Bill Ackman’s Pershing Square‘s Annual Letter for 2018, the fund disclosed a careful analysis of every position from its 13F portfolio, including Hilton Worldwide Holdings Inc. (NYSE:HLT). You can download a copy of the letter – here. Bill Ackman pointed out that the company is trading at less than 23 times of his estimates of 2019 earnings, which represents a lower price than of its historical average. He thinks that the company is an attractive investment with great future growth potential.

Hilton Worldwide Holdings Inc  (“HLT”)We reestablished an investment in Hilton in the fourth quarter of 2018 as the decline in the company’s share price provided us with an opportunity to once again own Hilton at an attractive valuation. We previously owned a small investment in Hilton in 2016, but sold our stake as its share price appreciated rapidly during our accumulation period. Hilton is a high-quality, asset-light, high-margin business with significant growth potential led by a superb management team.We believe that Hilton has a unique competitive moat: its large and growing network of brands and properties offers a robust self-reinforcing value proposition for both guests and hotel owners. For guests, Hilton provides a consistent and reliable experience in a large variety of destinations at diverse price points, as well as an attractive loyalty program with enhanced awards, amenities, and customer service. For hotel owners, Hilton provides access to its more than 85 million loyalty program members, large-scale marketing programs, best-in-class reservation and IT systems, and supply chain purchasing power, which collectively allow hotel owners to achieve superior, above-market rates of return on capital. Hilton’s robust value proposition for its franchisees and partners has allowed the company to expand its room count by 6% to 7% per year, a key driver of Hilton’s long-term growth. We believe that Hilton can maintain its current pace of unit growth over the long term as the company expands its international footprint with existing brands, continues to create new brands, and converts unbranded hotels to Hilton’s network of brands. Hilton’s current pipeline, more than half of which is under construction, amounts to 40% of its existing hotel rooms. In addition, secular growth in travel should underpin strong revenue per available room (“RevPAR”) growth (a measure of same-store sales for the lodging industry) over the longer term. While we expect RevPAR to remain positive over the coming years, unlike a typical hotel owner, Hilton’s fee-based, asset-light business model insulates the company from the outsized negative impact on profitability from potential short-term declines in RevPAR. We believe Hilton can sustain attractive high-single-digit, top-line growth, which, coupled with cost-control and a robust share repurchase program, should allow it to compound earnings per share at a mid-teens growth rate for many years.

At present, Hilton trades at less than 23 times our estimate of 2019 earnings, a discount to its historical average, and below our estimate of the company’s intrinsic value based upon its high-quality, fee-based business model and strong future growth potential. We believe sustained execution by Hilton’s management team will demonstrate the durability of Hilton’s business model, which we believe is currently underappreciated by the market. Hilton’s share price, including dividends, declined 2% in 2018 from our initial average cost, but has returned 20% year-to-date. 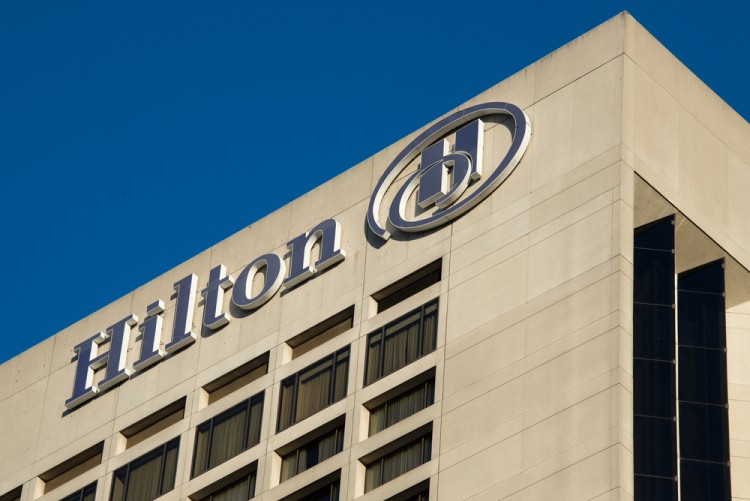 Hilton Worldwide Holdings is a world-renowned hospitality company that runs and franchises a vast portfolio of hotels. It has a century-long tradition that dates back to 1919 when it was launched by Conrad Hilton.

Heading into the first quarter of 2019, a total of 47 of the hedge funds tracked by Insider Monkey were bullish on this stock, a change of 4% from the previous quarter. The graph below displays the number of hedge funds with bullish position in HLT over the last 14 quarters. With hedge funds’ capital changing hands, there exists an “upper tier” of notable hedge fund managers who were boosting their holdings meaningfully (or already accumulated large positions).

More specifically, Pershing Square was the largest shareholder of Hilton Worldwide Holdings Inc (NYSE:HLT), with a stake worth $786 million reported as of the end of September. Trailing Pershing Square was D1 Capital Partners, which amassed a stake valued at $370.5 million. Long Pond Capital, OZ Management, and Eagle Capital Management were also very fond of the stock, giving the stock large weights in their portfolios. 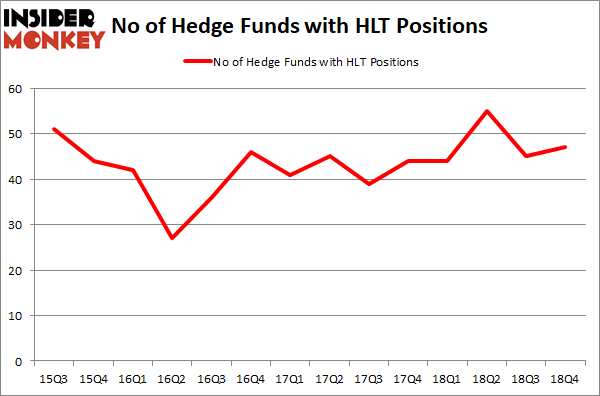