First up, payroll processor ADP reported that the private sector added 198,000 jobs in February. That’s down slightly from January’s addition of 215,000 jobs but above analyst expectations of 175,000. ADP’s report always comes out two days before the government’s nonfarm payrolls report, which will be released on Friday. The government’s report includes both private and public jobs data. Economists expect the government’s report to show jobs growth of just 160,000 and no change in the unemployment rate, which sits at 7.9%. 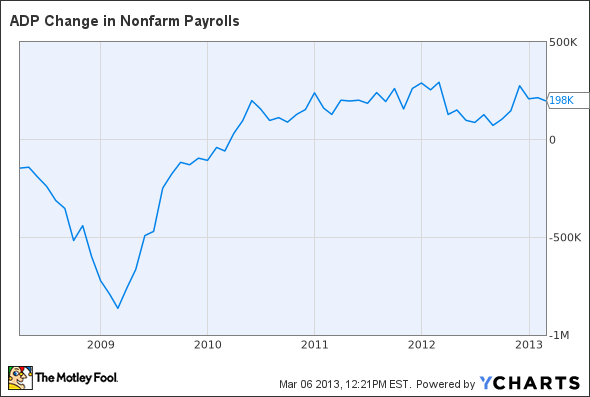 The second economic release came from the Department of Commerce, which reported that factory orders dropped 2% in January. That’s below December’s 1.3% growth but better than analyst expectations of a 2.2% drop. Factory orders include both durable and nondurable goods. Last week the advance report on durable-goods manufacturers showed that durable-goods orders dropped 5.2% in January. This led analysts to lower their expectations for the factory goods report. However, the initial report from the Department of Commerce was slightly too dour, as the drop in durable-goods orders was revised upward to a 4.9% drop for January.

Today’s Dow leader
Today’s Dow leader is Hewlett-Packard Company (NYSE:HPQ), up 3.6% to $21.10. HP is leading the Dow higher for the second day in a row. Yesterday the company announced that it was selected by Teradyne “to improve operational efficiency, reduce network downtime and boost design-phase efficiency for new products” by using HP’s FlexNetwork architecture. While this is a small victory, it shows that HP can continue to innovate and win contracts in the hotly contested networking and enterprise-storage space.

Public-facing wins are a must, as Hewlett-Packard Company (NYSE:HPQ) is undergoing a turnaround under new CEO Meg Whitman. Three members of the company’s board came under fire yesterday from proxy advisory firm ISS, which recommended that investors vote against re-electing Chairman Ray Lane, head of the audit committee; G. Kennedy Thompson; and John Hammergren, the head of the finance and investments committee. All three were in their positions in August of 2011 when HP paid $10.3 billion for Autonomy, which later earned HP a massive $8.8 billion writedown. While Hewlett-Packard Company (NYSE:HPQ) is alleging fraud by Autonomy’s executives, this was the second $8 billion-plus writedown of a recent acquisition by HP in 2012. Meg Whitman certainly has her work cut out for her.

The article HP’s Surge Leads the Dow to a New All-Time High originally appeared on Fool.com.