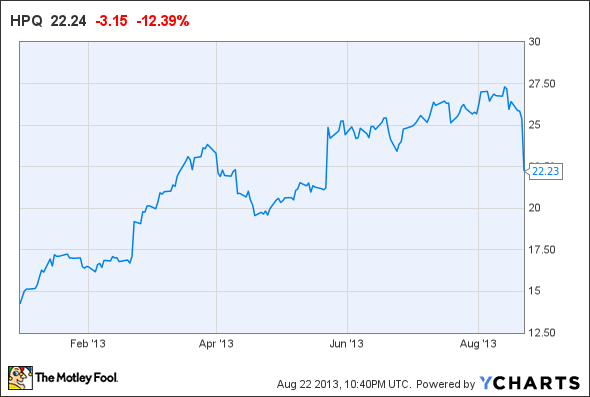 HP appears to be perpetually undervalued, as many analysts are overly focused on revenue growth as opposed to earnings and free cash flow, which are the real drivers of value in a business. As of Thursday’s close, HP’s market cap has shrunk to $43 billion, even though the company has just $1.2 billion in net debt now and will produce free cash flow of roughly $8 billion this year.

As a value investor, this free cash flow yield over 18% is incredibly attractive. Moreover, with Hewlett-Packard Company (NYSE:HPQ) approaching its zero net debt target, much of this cash flow is likely to be returned to shareholders through higher dividends and share buybacks. As a result, HP looks like a solid contrarian value investment.

Strange fall
The odd thing about HP’s big drop is that nothing really bad happened. Adjusted EPS of $0.86 came in right in the middle of the $0.84 to $0.87 outlook range that management provided in May. Revenue did come in slightly below the average analyst estimate, but the discrepancy was less than 1%.

There were no big surprises about Hewlett-Packard Company (NYSE:HPQ)’s outlook, either. The company narrowed its FY13 EPS guidance range to $3.53-$3.57, compared with a prior outlook of $3.50-$3.60. That will put HP’s earnings near the top of the original guidance provided last October for EPS of $3.40-$3.60.

The biggest “negative” was CEO Meg Whitman’s admission that HP is unlikely to post revenue growth in FY14, whereas in May she had said that revenue growth was still possible for next year. However, this disclosure seems less dire if you consider that analysts already expected a 2% drop in revenue next year.

What’s going on here?
It’s impossible to reliably explain short-term stock price fluctuations. However, the most plausible explanation for the market’s severe reaction to HP’s earnings report is that many people expected another earnings beat this week, after the company came in ahead of expectations with its last two earnings reports. Indeed, I thought there was a good chance that the company would beat estimates and raise its FY13 guidance again.

Hewlett-Packard Company (NYSE:HPQ)’s solid but uninspiring quarterly earnings clearly did not meet this standard. The fact that HP stock had more than doubled since late November also probably inspired investors with shorter time horizons to sell. With revenue growth now “postponed” until FY15 (or later), HP’s rapid multiple expansion was destined to end.