Hewlett-Packard Company (HPQ), The Coca-Cola Company (KO): These Dow Stocks Are Up in Advance of the Fed’s Statement

There were no U.S. economic releases today, so the market is focused solely on the Fed’s statement. To review, as part of its quantitative-easing program, the Federal Reserve is purchasing $85 billion worth of long-term assets each month — $45 billion in long-term Treasuries and $40 billion in mortgage-backed securities. This is an effort to keep rates down and the economy chugging along.

Investors have begun to worry about when and how the Fed will wind down its quantitative-easing program. Bernanke has made a big effort to communicate the Fed’s thinking so as to not to surprise investors. In its previous statements, the Federal Reserve has said it will keep the purchases going until unemployment falls to 6.5%, inflation rises past the Fed’s target range of 2% to 2.5%, or long-term inflation expectations take off.

Right now we’re not close to any of the Fed’s targets, with unemployment at 7.6%, inflation below 2%, and long-term inflation expectations at 2% (as per the TIPS Spread — the difference between the yields on Treasury Inflation Protection Securities and the nominal U.S. Treasury bond yield). Still, investors are worried. While the Dow has not really reflected it, the bond markets have fallen since May: 10-year Treasury yields have risen from 1.6% to roughly 2.2% now. 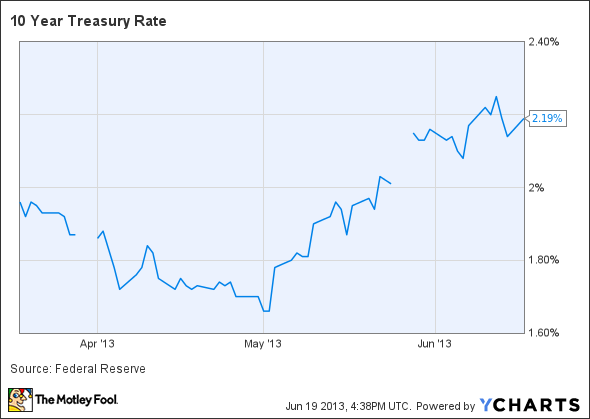 So what will the Fed say, and how will the markets react? I don’t know, and anyone who claims to know is lying. You can make educated guesses, but they’re just that — guesses. While thousands of people closely monitor the Fed and all its members, surprises are bound to happen. However, as the Fed has been clear on its stance so far, your investment strategy should not be predicated upon small changes in the Fed’s statements. If it is, your outlook is too short-term for successful investing.

Despite the uncertainty surrounding the upcoming Fed statement, some Dow stocks are making decent gains. Among today’s leading Dow stocks is Hewlett-Packard Company (NYSE:HPQ), up 0.9%. Earlier today, HP hit a new 52-week high of $25.87. The company has been on a tear this year, up 81% year to date as it continues its slow turnaround under the guidance of CEO Meg Whitman.
Signs of this were seen yesterday when Hewlett-Packard Company (NYSE:HPQ) announced that it would replace the head of its printing and PC business with Dion Weisler, who was hired last year from Lenovo. The PC business has been struggling this year; in the first quarter, worldwide PC sales saw their worst drop in history, down 14%.