U.S. stocks are mixed today after the Federal Open Market Committee released the minutes from its July meeting. Nearly all of the Fed’s officials agreed that the $85 billion asset purchase plan that’s kept long-term interest rates low should start to be pared back, or “tapered,” by the end of the year — meaning it could happen after the September, October, or December meeting. This has been widely expected by markets and has caused a slow decline in stocks over the past month, which isn’t all that bad when you consider that the Dow Jones Industrial Average has returned 16.9% this year and the S&P 500 has gained 15.9%. Stocks briefly plunged when the minutes were released, and they have since recovered slightly. As of 3:45 p.m. EDT the Dow is down 0.57%, while the S&P 500 is down 0.41%. 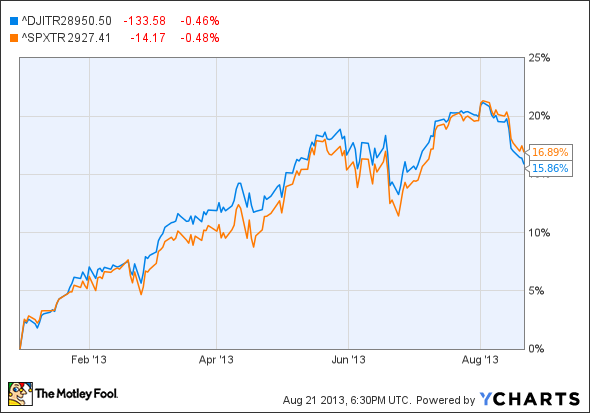 Hewlett-Packard Company (NYSE:HPQ) is leading the Dow’s losers just hours before reporting earnings. There are reports out that Dave Donatelli and Marty Homlish, two top executives, have been reassigned, indicating a management shakeup. That’s not necessarily bad news, but a reorganization during a turnaround can make investors uncomfortable. The rubber really hits the road after the market closes, as we’ll see whether Hewlett-Packard Company (NYSE:HPQ) clears the hurdles that Wall Street has set for it: $27.3 billion in revenue and earnings of $0.86 per share.

Moving in the other direction is Microsoft Corporation (NASDAQ:MSFT), which is up 0.2% late in trading. The company found a use for 800,000 unused Surface RTs by offering them as a reward for schools who switch to its search engine Bing for Schools, which is stripped of ads and includes privacy protections. A school with about 60 Bing users could earn a Surface RT per month — not a bad deal just for switching search engines.

The Surface RT was a failure as a consumer product, but it has many of the capabilities that children need, and getting them used to using the Surface and Bing could be a big plus for the company. At least we know the company won’t be sending the Surface RT to a landfill and has a goal of using it as a long-term marketing tool.

The article Fed Stays the Course, Markets Freak Out originally appeared on Fool.com and is written by Travis Hoium.