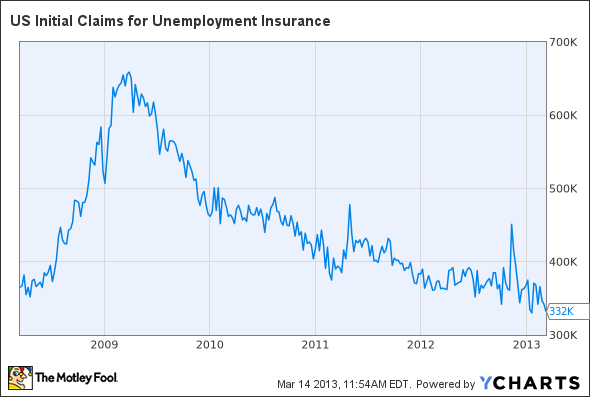 New unemployment claims can be volatile, so it is generally better to watch the four-week moving average, which dropped by 2,750 to 346,750. That’s the lowest level since 2008.

While the jobs market is strengthening, the economy is still not adding jobs fast enough to significantly reduce the unemployment rate anytime soon. The Federal Reserve Open Market Committee has said it plans to continue QE3 until the unemployment rate hits 6.5% or inflation picks up. Until then, the Fed will continue buying up $85 billion worth of long-term assets every month to prop up the economy.

Today’s Dow leaders
Today’s Dow leader is Hewlett-Packard Company (NYSE:HPQ), up 1.8% to $21.71 on no real news. Earlier this week the British Serious Fraud Office opened an investigation into HP’s accusations of fraud against former executives of Autonomy. If you recall, HP acquired Autonomy for $10 billion in 2011, only to write the acquisition down for $8.8 billion last year. HP accused former executives — including Autonomy’s founder and former CEO, Mike Lynch — of fabricating sales to boost Autonomy’s financials. While American authorities commenced investigations soon after Hewlett-Packard Company (NYSE:HPQ)’s accusations, this is the first notice that British authorities are also investigating.