The National Association of Home Builders reported that its housing-market index fell by two points to 44 in March, falling short of analyst expectations of a rise to 47. The housing market improved throughout 2012 but leveled off at the end of the year, with the housing-market index hitting a five-year high of 47 in December. A level below 50 indicates that more builders see conditions as negative, rather than positive. It’s important to note that 46 is still far above the HMI’s March 2012 level of 28 and up more than fivefold from the low of eight hit in January 2009. Hopefully, this is not the start of a downward trend for the year. 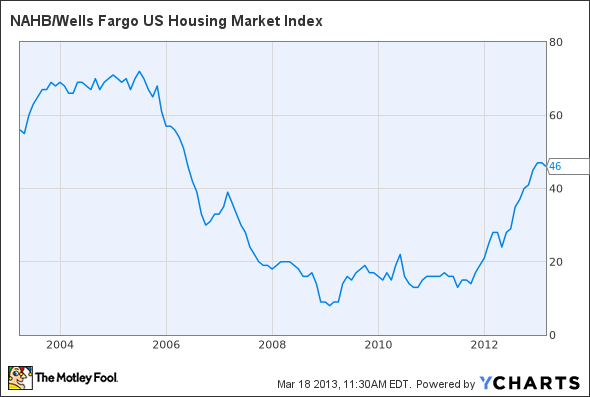 NAHB Chief Economist David Crowe had this to say about the drop:

“In addition to tight credit and below-price appraisals, home building is beginning to suffer growth pains as the infrastructure that supports it tries to reestablish itself. During the Great Recession, the industry lost home building firms, building material production capacity, workers who retreated to other sectors and the pipeline of developed lots. The road to a housing recovery will be a bumpy one until these issues are addressed, but in the meantime, builders are much more optimistic today than they were at this time last year.”

While the housing market weighs on the U.S., the big reason stocks are down today was news over the weekend of the Cyprus bailout and bank account tax. To bailout the country’s bankrupt banks, in addition to a cash infusion from Europe, the country is instituting a tax of between 6.75% and 9.9% on the cash in people’s bank accounts, to be taken tomorrow. After the tax was announced, Cypriots immediately rushed to ATMs, which quickly ran out of cash; bank accounts have since been frozen. Investors are worried that the bank levy could cause runs on weaker banks across Europe. If you want to know more, Fool banking analyst Morgan Housel took a long look at the situation in Cyprus and what it means for investors.