Dividend aristocrats treat their payouts like nuclear safety protocols. One mistake can blow up your reactor — or destroy your share price overnight. So their dividend checks never, ever shrink, and a true aristocrat increases its payouts every year. Income investors love these wealth-building policies, and for good reason: An unweighted portfolio of the 54 S&P 500 Dividend Aristocrats tickers would have returned 225% over the last 10 years, assuming you reinvested every dividend check in more shares.

By comparison, the Dow Jones Industrial Average returned just 116% over the same period, dividend-adjusted and all. The dividend champs are an elite group indeed — only nine of the 30 Dow components current qualify for a spot on the list, the rest having failed to increase dividends for at least 25 years straight. These stocks average 4.2 CAPS stars (out of five), with only two tickers rated “below average” by your fellow investors. It’s a quality group by any measure.

Is this an impostor?
Hewlett-Packard Company (NYSE:HPQ) just raised its dividend by 10%. The board approved a modest increase last year as well, not to mention a 50% boost in 2011. Is this another dividend champion or what?

Well, no — not even close. HP might have landed on the Aristocrats list 10 years ago, when the computer industry fired on all cylinders and the company had raised payouts without fail for many years. But then the dot-com bubble popped, and Hewlett-Packard Company (NYSE:HPQ)’s payouts got stuck at $0.08 per share for 11 years. 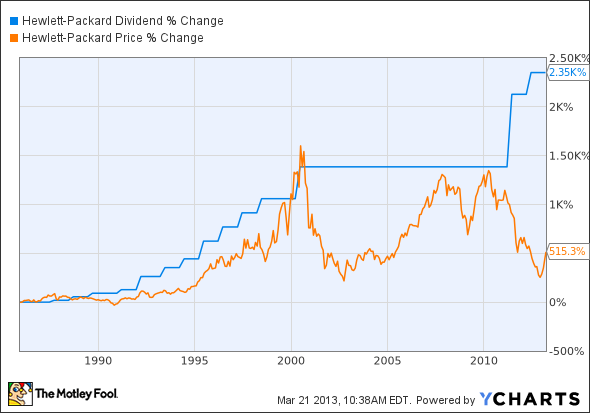 The recent return to regular dividend increases coincides with a massive share-price drop. The company has lost its way, and investors can feel it. If you feel cynical today, you could call these increases an attempt to buy investor love with higher yields. So far, it’s not working.

That’s not just my own opinion. Strategy failures in recent years made some Hewlett-Packard Company (NYSE:HPQ) shareholders question the competency of its directors. In this week’s annual shareholder meeting, three directors (including chairman Ray Lane) received only a narrow majority of “yea” votes.

To put that benchmark into context, remember that The Walt Disney Company (NYSE:DIS) removed Michael Eisner from the board and then the CEO office after he received a 57% approval rating. That was absolutely the right move, as successor Bob Iger has led the company to fantastic success and a market-crushing 179% shareholder return in nine years on the job.