So far in 2013, the three stocks highlighted in this article have had dramatic increases in share prices. This article will take a look at whether this can continue. Furthermore, it will look at bright spots within the companies to see where they are doing well and also to find areas that could bring strong growth. I believe these are solid companies and I will tell you why.

The three companies that will be discussed include Hewlett-Packard Company (NYSE:HPQ), Best Buy Co., Inc. (NYSE:BBY), and Staples, Inc. (NASDAQ:SPLS).

The following is a chart showing the performance of the three stocks year-to-date compared to the S&P 500. 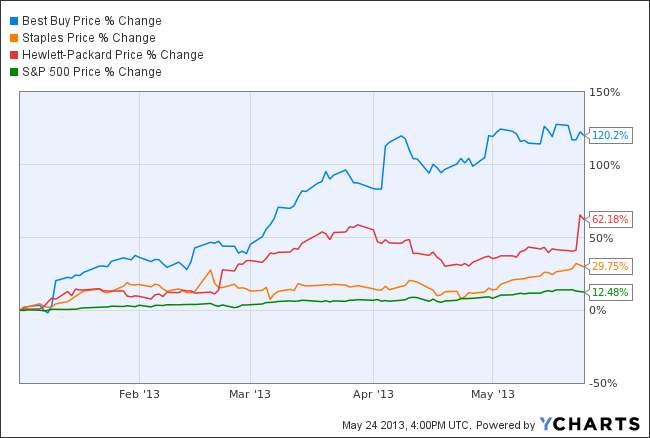 As the chart shows, these stocks have all outperformed the S&P 500 so far this year by a large margin.

What these stocks have in common

These three stocks have some things in common that have made them intriguing investments since last year and the beginning of this year.

Best Buy Co., Inc. (NYSE:BBY) and Hewlett-Packard Company (NYSE:HPQ) have both been in turnaround mode, with their share prices reaching 52-week lows toward the end of last year. The worries for Hewlett-Packard Company (NYSE:HPQ) at the time were that earnings were going to weaken and start to decline significantly, in addition to the Autonomy scandal. Best Buy was declining due to earnings worries. Best Buy had an offer to have the company taken private, although the bid was only $17 per share at the high end.

Staples, Inc. (NASDAQ:SPLS) was trading toward the low end of its 52-week range, partly due to the fact that the small business industry has not been growing well within the economic recovery. Earnings were also a concern. The company recently released its first-quarter results that also included an upbeat view for earnings for the rest of the year.

Additionally, Best Buy Co., Inc. (NYSE:BBY) and Staples have two things in common that I feel are significant to their future. Both have strong Internet websites and traffic to support them. This, I feel, provided some insight into why they were undervalued at the time and that they may still be undervalued.

Staples, Inc. (NASDAQ:SPLS) is the world’s second largest Internet retailer according to its website. Internet sales increased by about 5% in 2012 compared to 2011, with 2012 full year Internet sales coming in at $10.6 billion. This makes up about 40% of its total worldwide yearly sales. With Staples, Inc. (NASDAQ:SPLS) already having a strong physical storefront, it is a double threat. If consumers shift back to shopping in person more, it is in a strong position to capture those sales. If Internet sales continue to grow in favor, its online presence is very strong.

Best Buy Co., Inc. (NYSE:BBY) has a strong and growing online presence. The company already is well known for its physical big box store fronts, as its stock experienced many years of strong performance in the 1990s because of this. Black Friday saw Internet traffic increase by 60% year over year overall. Best Buy’s website moved up to become the third most visited site in the world on Black Friday in 2012.

Best Buy Co., Inc. (NYSE:BBY)’s fiscal fourth quarter is the most important quarter for the company, as the majority of its full year earnings come from here because of Black Friday, Cyber Monday, and holiday sales. Upon seeing how strong its web traffic was on Black Friday, and the preliminary indications showing that its in-store traffic was strong, this provided some evidence that the holiday season may have been going well.

Sure enough, its fiscal fourth-quarter earnings per share came in at $1.64, ahead of the $1.54 estimate. This helped to propel its share price. With its growing online presence, coupled with its strong physical stores, Best Buy is a force in the industry despite the stiff competition from Amazon.com, Inc. (NASDAQ:AMZN).

The turnaround is in place for HP

With former eBay CEO Meg Whitman now leading the charge as CEO for Hewlett-Packard Company (NYSE:HPQ), the company has successfully managed its turnaround so far. The company has beaten earnings estimates for the past four quarters reported, with earnings for the quarter that ended in January of 2013 coming in at $0.82 per share (ahead of the $0.71 per share estimate). Even better, the company is expected to grow its earnings by about 3% per year over the next five years. A year or so ago, the worry was that earnings were going to decline significantly. Earnings for 2013 are expected to come in at $3.49 per share.