Hertz Global Holdings, Inc. (HTZ): Is it Time to Buy the Rental?

Car rental giant Hertz Global Holdings, Inc. (NYSE:HTZ) recently hit five-year highs, despite posting a loss during its fourth quarter. The second largest car rental company in America reported a strong outlook for 2013, as it regains pricing power against its rivals and puts its recent acquisition of Dollar Thrifty to good use. Should investors consider buying this rental? 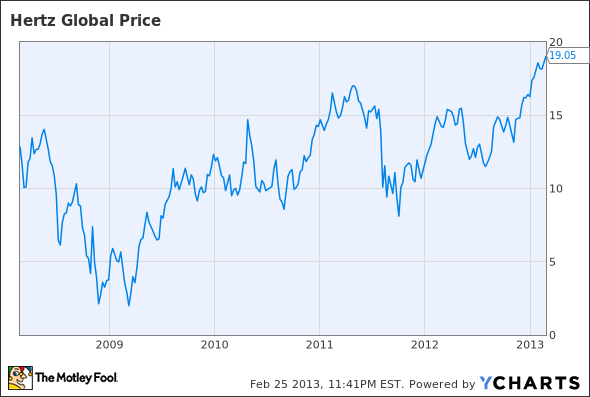 For its fourth quarter, Park Ridge, New Jersey-based Hertz Global Holdings, Inc. (NYSE:HTZ) posted a loss of 9 cents per share, or $36.4 million – which initially looked like a sharp decline from the 11 cents per share, or $52.1 million, it earned in the prior year quarter. However, excluding one-time charges, such as its acquisition of Dollar Thrifty, Hertz earned 33 cents per share, topping the Thomson Reuters’ forecast by two cents.

Both top and bottom line estimates exceed the Thomson Reuters’ forecast of $1.78 per share on revenue of $10.79 billion.

Hertz has long been locked in a pricing war against Avis Budget Group Inc. (NASDAQ:CAR) and privately held Enterprise Holdings at airports worldwide.

To decrease its dependence on low-margin airport rentals, Hertz has tirelessly attempted to acquire Dollar Thrifty — which serves the leisure car rental market — over the past two years. The FTC wasn’t too keen on the deal, which it believed would give Hertz an unfair advantage over its competitors.

Hertz finally sealed the deal in November 2012 for $2.6 billion, but with a catch — it had to give up 29 of Dollar Thrifty’s airport locations and sell its low-cost Advantage brand, which operates at 62 locations. The newly merged company, after reductions, will have 10,400 locations across 150 countries.

Hertz also stated that the synergies from the acquisition would likely exceed its earlier forecasts, but declined to provide exact projections.

With only two publicly traded players left on the field and the FTC getting involved, the car rental industry is now heavily consolidated – which means that other smaller, overseas businesses, such as German rental company Sixt AG, could be next on their shopping lists.

Hertz CEO Mark Frissora stated that the company was off to a “fast start” for the new year. The company has been traditionally tied to airline traffic and hotel bookings, since its rentals are often added as part of a package deal by booking services such as Orbitz Worldwide, Inc. (NYSE:OWW) and Priceline.com Inc (NASDAQ:PCLN). A recovery in domestic business and air travel helped boost its January numbers.

The decline in Dollar Thrifty’s numbers was attributed to the aforementioned reduction of the company’s businesses — a requirement of the Hertz acquisition — and should not alarm investors.