Shares of Smith & Wesson Holding Corporation (NASDAQ:SWHC) rose more than 5% during intraday trading Friday, after the gunmaker announced a significant new share-repurchase plan along with the release of solid preliminary fiscal fourth-quarter and full-year 2013 results.

A record quarter
For the quarter, net sales rose 38% from same the year-ago period to $179 million, while GAAP net income grew an even more impressive 63% to a record $0.44 per diluted share.

For the company’s fiscal 2013 year, preliminary net sales came in at $588 million, or an increase of around 43% over fiscal 2012. Meanwhile, preliminary GAAP net income is roughly $1.22 per diluted share, or more than triple the $0.40 per share Smith & Wesson earned in the previous year.

When all was said and done last quarter, Smith & Wesson Holding Corporation (NASDAQ:SWHC) also noted that it ended the current fiscal year with a cash balance of $100.5 million. For those of you keeping track, that’s roughly 16% of its entire current market capitalization.

I suppose this shouldn’t come as a huge surprise, especially considering arms and ammunition manufacturers such as Smith & Wesson Holding Corporation (NASDAQ:SWHC), Sturm, Ruger & Company (NYSE:RGR), and Olin Corporation (NYSE:OLN) have benefited from unprecedented demand for their products, which, according to comments from Olin management last quarter, began the Saturday before Election Day last year.

Equally unsurprising, and as I wrote back in April, gun-industry stocks had outperformed the broader market since then — that is, at least until they were reined in after fears of waning demand hit as the crucial background-checks amendment to President Obama’s gun legislation was shot down in the U.S. Senate less than two months ago, effectively leaving the gun bill dead in the water.

Even so, when we look at gun stocks’ returns since demand spiked last November, they’ve still largely managed to at least keep pace with the broader market. Until now, however, the one notable exception has been poor Smith & Wesson Holding Corporation (NASDAQ:SWHC), which previously suffered on the heels of comparatively weak earnings when they couldn’t meet demand: 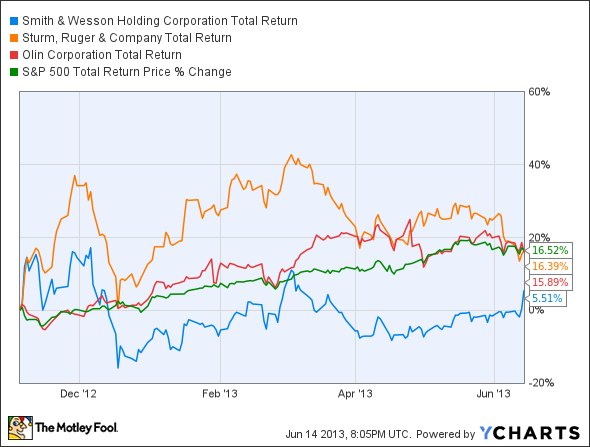 Now, however, according comments from Wedbush Securities analyst Rommel Dionisio, Smith & Wesson Holding Corporation (NASDAQ:SWHC) is finally catching up, thanks primarily to their efforts of running at manufacturing capacity to meet the record demand.

Increasing your slice of the pie
What’s more, in a separate press release, the company also outlined plans to exchange its current debt — which is consists of $42.8 million in 9.50% senior notes due 2016 — for $75 million in lower-interest 5.875% senior notes due in 2017. In total, the transaction will result in net cash to the company of around $25 million, which Smith & Wesson Holding Corporation (NASDAQ:SWHC) CEO James Debney stated will be used to make “strategically opportunistic” investments.