Published on March 21, 2016 at 3:25 pm by Sure Dividend in Dividend Stocks,News,Stock Analysis

Sherwin-Williams Co (NYSE:SHW) is the leader in the North American coatings (paint) industry. The company is the 3rd largest coatings corporation globally. 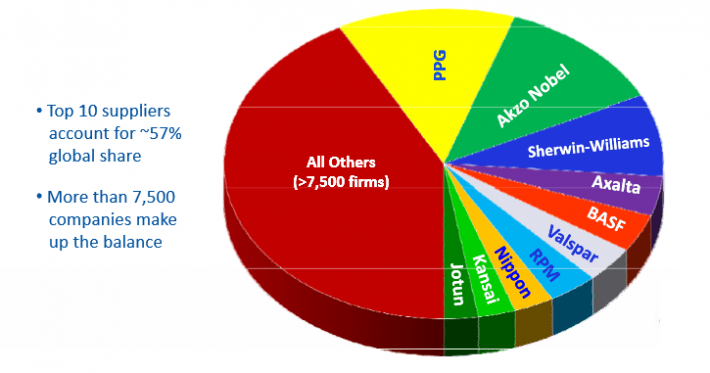 The company is not an overnight success.  Sherwin-Williams was founded in 1866.

Sherwin-Williams’ management has a long history of rewarding shareholders with rising dividend payments. The company has paid increasing dividends for 37 consecutive years. This makes Sherwin-Williams 1 of only 50 Dividend Aristocrats.

Among the investors tracked by Insider Monkey, Shervin-Williams registered a slight decrease in popularity during the fourth quarter and 43 funds reported long positions in the company, versus 45 funds a quarter earlier. However, the total value of their holdings increased to $1.91 billion from $1.61 billion and represented 7.90% of the company’s outstanding stock at the end of 2015. The largest shareholder of Shervin-Williams in the Insider Monkey database is Eric Mindich’s Eton Park Capital, which owns some 1.12 million shares. In addition, Eton Park owns 1.20 million shares in ‘Call’ options.

The company’s stock currently has a 1.2% dividend yield.  Despite its long corporate history Sherwin-Williams is still in growth mode.

This growth is reflected in the rise of Sherwin-Williams stock price over the last several years: The company is realizing growth by consolidating the fragmented coatings industry.

Five Dividend Kings to Buy Based on Billionaire Investors’ Sentiment