Is Westlake Chemical Corporation (NYSE:WLK) undervalued? Investors who are in the know are betting on the stock. The number of long hedge fund positions inched up by 2 recently. Our calculations also showed that WLK isn’t among the 30 most popular stocks among hedge funds.

What have hedge funds been doing with Westlake Chemical Corporation (NYSE:WLK)?

At Q1’s end, a total of 26 of the hedge funds tracked by Insider Monkey were long this stock, a change of 8% from the previous quarter. By comparison, 32 hedge funds held shares or bullish call options in WLK a year ago. With hedge funds’ sentiment swirling, there exists a few key hedge fund managers who were adding to their holdings meaningfully (or already accumulated large positions). 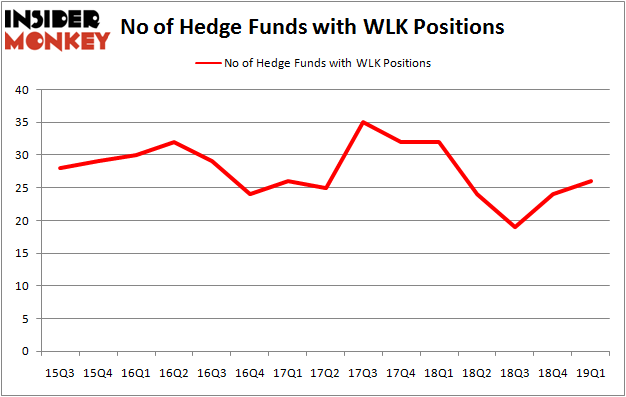 The largest stake in Westlake Chemical Corporation (NYSE:WLK) was held by Millennium Management, which reported holding $73.1 million worth of stock at the end of March. It was followed by Holocene Advisors with a $59 million position. Other investors bullish on the company included Citadel Investment Group, AQR Capital Management, and Point72 Asset Management.

As industrywide interest jumped, key money managers were breaking ground themselves. Holocene Advisors, managed by Brandon Haley, assembled the biggest position in Westlake Chemical Corporation (NYSE:WLK). Holocene Advisors had $59 million invested in the company at the end of the quarter. Steve Cohen’s Point72 Asset Management also made a $29.8 million investment in the stock during the quarter. The other funds with new positions in the stock are Zach Schreiber’s Point State Capital, Nick Niell’s Arrowgrass Capital Partners, and Ray Dalio’s Bridgewater Associates.

As you can see these stocks had an average of 17.75 hedge funds with bullish positions and the average amount invested in these stocks was $233 million. That figure was $365 million in WLK’s case. Snap-on Incorporated (NYSE:SNA) is the most popular stock in this table. On the other hand Grupo Aval Acciones y Valores S.A. (NYSE:AVAL) is the least popular one with only 8 bullish hedge fund positions. Compared to these stocks Westlake Chemical Corporation (NYSE:WLK) is more popular among hedge funds. Our calculations showed that top 20 most popular stocks among hedge funds returned 1.9% in Q2 through May 30th and outperformed the S&P 500 ETF (SPY) by more than 3 percentage points. Unfortunately WLK wasn’t nearly as popular as these 20 stocks and hedge funds that were betting on WLK were disappointed as the stock returned -12.8% during the same period and underperformed the market. If you are interested in investing in large cap stocks with huge upside potential, you should check out the top 20 most popular stocks among hedge funds as 13 of these stocks already outperformed the market in Q2.