After several tireless days we have finished crunching the numbers from nearly 750 13F filings issued by the elite hedge funds and other investment firms that we track at Insider Monkey, which disclosed those firms’ equity portfolios as of March 31. The results of that effort will be put on display in this article, as we share valuable insight into the smart money sentiment towards WD-40 Company (NASDAQ:WDFC).

WD-40 Company (NASDAQ:WDFC) investors should be aware of a decrease in enthusiasm from smart money lately. WDFC was in 14 hedge funds’ portfolios at the end of the first quarter of 2019. There were 15 hedge funds in our database with WDFC holdings at the end of the previous quarter. Our calculations also showed that WDFC isn’t among the 30 most popular stocks among hedge funds.

In the financial world there are a lot of gauges shareholders put to use to size up publicly traded companies. A duo of the less utilized gauges are hedge fund and insider trading moves. We have shown that, historically, those who follow the best picks of the best fund managers can beat the S&P 500 by a healthy margin (see the details here).

How have hedgies been trading WD-40 Company (NASDAQ:WDFC)? 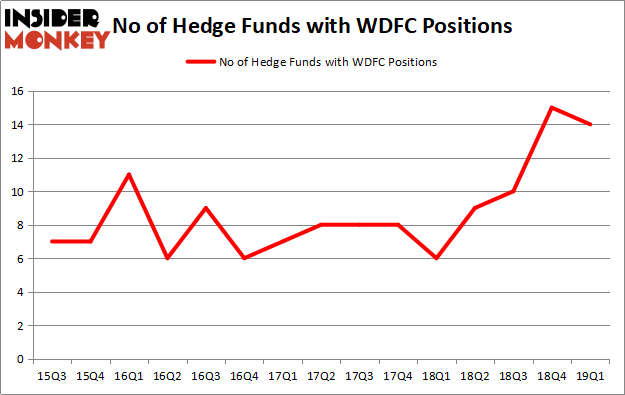 The largest stake in WD-40 Company (NASDAQ:WDFC) was held by Renaissance Technologies, which reported holding $85.3 million worth of stock at the end of March. It was followed by GLG Partners with a $25.4 million position. Other investors bullish on the company included Citadel Investment Group, GAMCO Investors, and AQR Capital Management.

Seeing as WD-40 Company (NASDAQ:WDFC) has witnessed declining sentiment from hedge fund managers, we can see that there lies a certain “tier” of money managers who were dropping their positions entirely last quarter. It’s worth mentioning that Peter Rathjens, Bruce Clarke and John Campbell’s Arrowstreet Capital said goodbye to the biggest position of the “upper crust” of funds monitored by Insider Monkey, comprising about $11.1 million in call options, and Matthew Hulsizer’s PEAK6 Capital Management was right behind this move, as the fund said goodbye to about $1.4 million worth. These moves are important to note, as total hedge fund interest dropped by 1 funds last quarter.

As you can see these stocks had an average of 14.75 hedge funds with bullish positions and the average amount invested in these stocks was $91 million. That figure was $137 million in WDFC’s case. Halozyme Therapeutics, Inc. (NASDAQ:HALO) is the most popular stock in this table. On the other hand SiteOne Landscape Supply, Inc. (NYSE:SITE) is the least popular one with only 12 bullish hedge fund positions. WD-40 Company (NASDAQ:WDFC) is not the least popular stock in this group but hedge fund interest is still below average. This is a slightly negative signal and we’d rather spend our time researching stocks that hedge funds are piling on. Our calculations showed that top 20 most popular stocks among hedge funds returned 6.2% in Q2 through June 19th and outperformed the S&P 500 ETF (SPY) by nearly 3 percentage points. Unfortunately WDFC wasn’t nearly as popular as these 20 stocks (hedge fund sentiment was quite bearish); WDFC investors were disappointed as the stock returned -3.8% during the same time period and underperformed the market. If you are interested in investing in large cap stocks with huge upside potential, you should check out the top 20 most popular stocks among hedge funds as 13 of these stocks already outperformed the market so far in Q2.