Is Valvoline Inc. (NYSE:VVV) a safe investment today? The best stock pickers are turning bullish. The number of long hedge fund positions increased by 1 recently. Our calculations also showed that vvv isn’t among the 30 most popular stocks among hedge funds.

How have hedgies been trading Valvoline Inc. (NYSE:VVV)?

At the end of the first quarter, a total of 19 of the hedge funds tracked by Insider Monkey were long this stock, a change of 6% from the fourth quarter of 2018. On the other hand, there were a total of 12 hedge funds with a bullish position in VVV a year ago. With hedgies’ sentiment swirling, there exists an “upper tier” of key hedge fund managers who were adding to their stakes significantly (or already accumulated large positions). 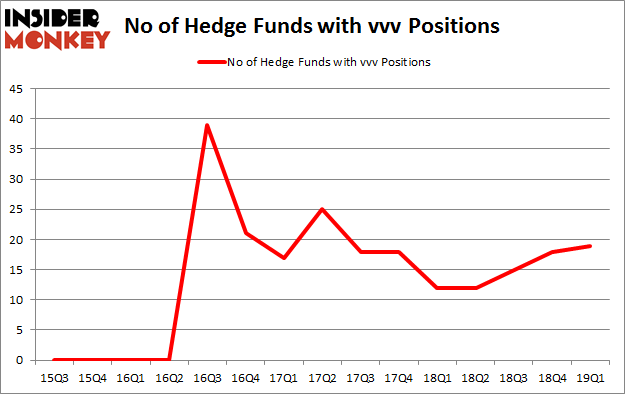 Among these funds, Adage Capital Management held the most valuable stake in Valvoline Inc. (NYSE:VVV), which was worth $91.3 million at the end of the first quarter. On the second spot was Tensile Capital which amassed $57 million worth of shares. Moreover, Cardinal Capital, GAMCO Investors, and Citadel Investment Group were also bullish on Valvoline Inc. (NYSE:VVV), allocating a large percentage of their portfolios to this stock.

Consequently, key money managers have been driving this bullishness. Blue Mountain Capital, managed by Andrew Feldstein and Stephen Siderow, assembled the most valuable position in Valvoline Inc. (NYSE:VVV). Blue Mountain Capital had $3.9 million invested in the company at the end of the quarter. David Costen Haley’s HBK Investments also initiated a $0.3 million position during the quarter.

As you can see these stocks had an average of 23 hedge funds with bullish positions and the average amount invested in these stocks was $318 million. That figure was $306 million in VVV’s case. Colfax Corporation (NYSE:CFX) is the most popular stock in this table. On the other hand Embraer SA (NYSE:ERJ) is the least popular one with only 8 bullish hedge fund positions. Valvoline Inc. (NYSE:VVV) is not the least popular stock in this group but hedge fund interest is still below average. This is a slightly negative signal and we’d rather spend our time researching stocks that hedge funds are piling on. Our calculations showed that top 20 most popular stocks among hedge funds returned 1.9% in Q2 through May 30th and outperformed the S&P 500 ETF (SPY) by more than 3 percentage points. Unfortunately VVV wasn’t nearly as popular as these 20 stocks (hedge fund sentiment was quite bearish); VVV investors were disappointed as the stock returned -4% during the same time period and underperformed the market. If you are interested in investing in large cap stocks with huge upside potential, you should check out the top 20 most popular stocks among hedge funds as 13 of these stocks already outperformed the market so far in Q2.

Hedge Funds Have Never Been More Bullish On Bright Horizons Family Solutions...
Monthly Newsletter Strategy
Download a free copy of our newsletter and see the details inside!
Hedge Fund Resource Center
Related News
Is Valvoline Inc. (VVV) A Good Stock To Buy? 10 Hottest Selling Products in the USA in 2018 Hedge Funds Were All Over Valvoline Inc (VVV)’s IPO 4 Stocks and 1 ETF That Had Soaring Short Interest Ahead of the Election 21 Best Tinder Bio Examples for Newly Single Moms 17 Best Excuses to Get Out of Work 25 Best Bumble Bios For Girls
Billionaire Hedge Funds