Does Valley National Bancorp (NASDAQ:VLY) represent a good buying opportunity at the moment? Let’s quickly check the hedge fund interest towards the company. Hedge fund firms constantly search out bright intellectuals and highly-experienced employees and throw away millions of dollars on satellite photos and other research activities, so it is no wonder why they tend to generate millions in profits each year. It is also true that some hedge fund players fail inconceivably on some occasions, but net net their stock picks have been generating superior risk-adjusted returns on average over the years.

Valley National Bancorp (NASDAQ:VLY) investors should pay attention to an increase in support from the world’s most elite money managers in recent months. VLY was in 11 hedge funds’ portfolios at the end of March. There were 8 hedge funds in our database with VLY positions at the end of the previous quarter. Our calculations also showed that vly isn’t among the 30 most popular stocks among hedge funds.

In the eyes of most stock holders, hedge funds are assumed to be underperforming, outdated investment vehicles of the past. While there are greater than 8000 funds with their doors open today, We choose to focus on the crème de la crème of this club, approximately 750 funds. These money managers command bulk of all hedge funds’ total asset base, and by observing their inimitable investments, Insider Monkey has unsheathed numerous investment strategies that have historically outperformed the broader indices. Insider Monkey’s flagship hedge fund strategy outperformed the S&P 500 index by around 5 percentage points a year since its inception in May 2014 through June 18th. We were able to generate large returns even by identifying short candidates. Our portfolio of short stocks lost 28.2% since February 2017 (through June 18th) even though the market was up nearly 30% during the same period. We just shared a list of 5 short targets in our latest quarterly update and they are already down an average of 8.2% in a month whereas our long picks outperformed the market by 2.5 percentage points in this volatile 5 week period (our long picks also beat the market by 15 percentage points so far this year).

What have hedge funds been doing with Valley National Bancorp (NASDAQ:VLY)?

At the end of the first quarter, a total of 11 of the hedge funds tracked by Insider Monkey were long this stock, a change of 38% from the fourth quarter of 2018. By comparison, 10 hedge funds held shares or bullish call options in VLY a year ago. With hedge funds’ positions undergoing their usual ebb and flow, there exists a few key hedge fund managers who were adding to their stakes meaningfully (or already accumulated large positions). 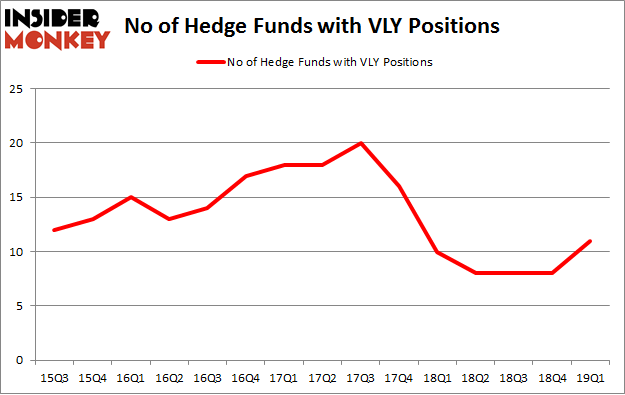 Among these funds, Renaissance Technologies held the most valuable stake in Valley National Bancorp (NASDAQ:VLY), which was worth $11.9 million at the end of the first quarter. On the second spot was Balyasny Asset Management which amassed $5.8 million worth of shares. Moreover, Millennium Management, Citadel Investment Group, and Stevens Capital Management were also bullish on Valley National Bancorp (NASDAQ:VLY), allocating a large percentage of their portfolios to this stock.

As you can see these stocks had an average of 13.25 hedge funds with bullish positions and the average amount invested in these stocks was $109 million. That figure was $27 million in VLY’s case. FS KKR Capital Corp. (NYSE:FSK) is the most popular stock in this table. On the other hand Manchester United PLC (NYSE:MANU) is the least popular one with only 11 bullish hedge fund positions. Compared to these stocks Valley National Bancorp (NASDAQ:VLY) is even less popular than MANU. Hedge funds clearly dropped the ball on VLY as the stock delivered strong returns, though hedge funds’ consensus picks still generated respectable returns. Our calculations showed that top 20 most popular stocks among hedge funds returned 6.2% in Q2 through June 19th and outperformed the S&P 500 ETF (SPY) by nearly 3 percentage points. A small number of hedge funds were also right about betting on VLY as the stock returned 9.6% during the same period and outperformed the market by an even larger margin.